How can a shoreline considered too wild to comfortably travel by foot or other means be transformed into a global hub for business and trade? Today, the Port of Chicago, with facilities at the mouth of the Calumet River (Iroquois Landing) and further inland at the junction of the Grand Calumet and Little Calumet rivers as well as on 100 acres along Lake Michigan, brings in annually over 19 million tons of cargo, more cargo than any other shipping terminal on the Great Lakes. Raw materials and finished goods move between ships and land at an unrelenting clip. The Port’s website boasts that “(a)ny commodity can be moved through the Port of Chicago economically and efficiently to anywhere, from anywhere, anytime. 24 hours a day, 7 days a week, 365 days a year.” Chicago was little more than a marsh too muddy and challenging to cultivate or settle. When and how did this vast center of business and trade get its start? Explorers discovered this promising bit of land on the shores of Lake Michigan and the rest, as they say, is history. 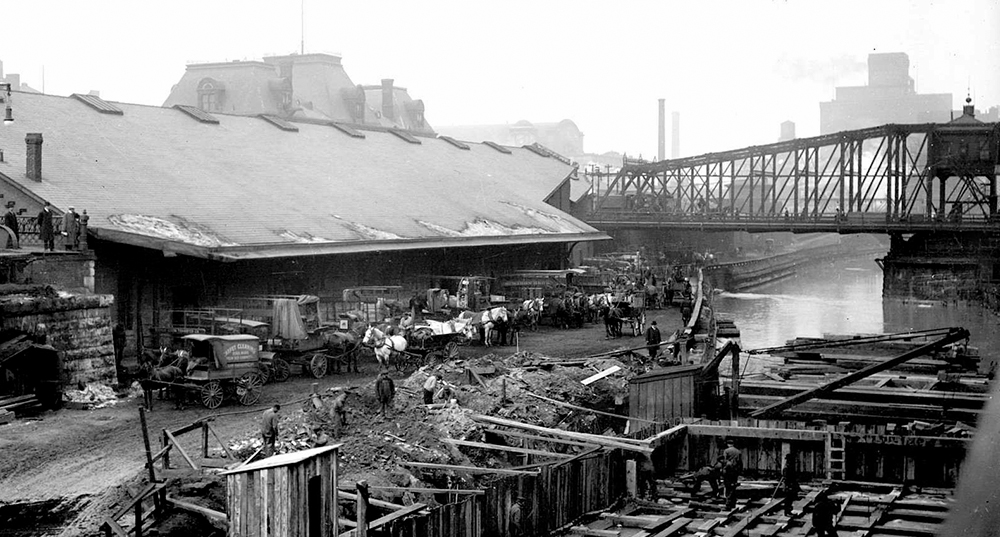 The Land of Wild Garlic

Native American tribes and explorers rarely lingered in “Chicagou,” named for the wild garlic that grew there. Harsh freezing winds in winter blowing across marshy lands with few trees and sub-zero temperatures made for gloomy living conditions. During mild times of the year, the land was difficult to farm and prone to flooding. Marsh lands extending a few miles inland from shore gave way to a large shallow basin called Mud Lake. This lake was also surrounded by flat, treeless prairie-wetlands, which served as a drainage area for a complex network of tributaries. Southwest of Chicago, west and east flowing rivers met in a wetland that spanned several miles. From this point, the Calumet River flowed east, linked up with several other small rivers and emptied into Lake Michigan. This network of rivers and their proximity to the shores of Lake Michigan would prove a blessing to enterprising settlers and tradespeople.

Passage to the Center of North America

Because no river flowed from the East coast to the Mississippi, travel inland was long and difficult. The French explorer Joliet, in company with his countryman, French missionary Marquette, was one of the first to map in 1674 the network of rivers near the shores of Lake Michigan (then Lake Illinois) that would give travelers direct access to the Mississippi and the interior spaces of North America. Joliet noted the area’s value for trade and tried to make the case to French leadership for the construction of a canal. His pleas fell largely on deaf ears until over 100 years later when two men, Jean Baptiste La Salle and Henri de Tonty, were sent to build a series of forts and claim the Mississippi basin for the French. Efforts were made to civilize the place, but living conditions were harsh and Chigagou remained a sparsely populated trading outpost for another 100 years.

Map of Marquette and Jolliet’s exploration of the Mississippi River, 1673

Skirmishes were still rare between fur traders, settlers and Native American tribes in the early years, but hostilities grew between groups as more people moved into the area. Aggravated by European intrusions, Native Americans blocked access to the portage that led to the inland rivers; travel through this area would be largely restricted until 1795. Soon, however, a new Republic flush with victory over the British started to claim lands. Chigagou became part of the new state of Illinois in 1784, still wild and largely unsettled with only a couple hundred residents. Following the Battle of Fallen Timbers in which many native tribes were overcome and forced to resettle elsewhere, the Treaty of Greenville was signed and the area known as Chigagou was given up by Native American tribes and officially became United States territory. The War of 1812 and the Blackhawk War further forced the movement of native peoples out of the Chicago area. 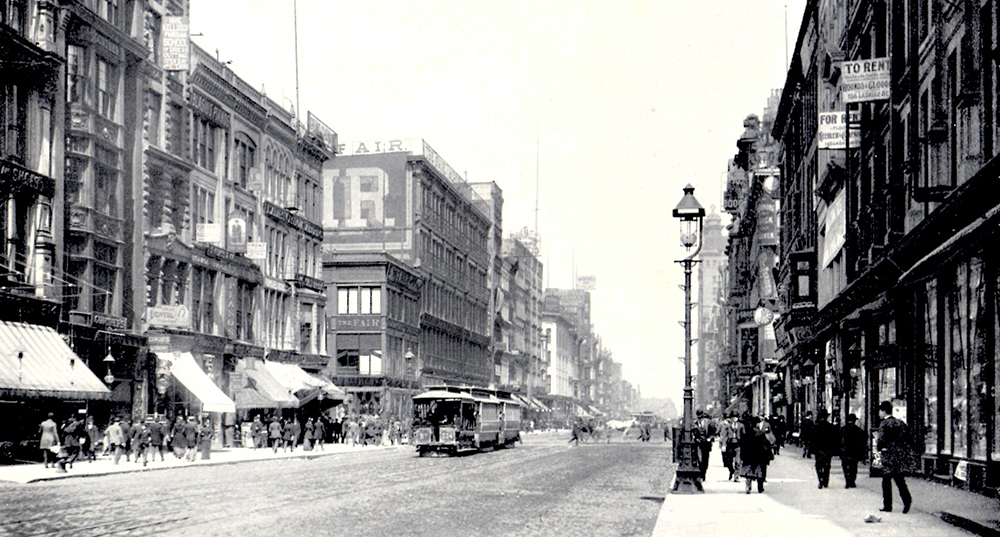 A Sandbar, A Retired Math Professor, and Early Work of the US Army Corps of Engineers

The Port of Chicago’s modern role in world trade begins with the explorations of Major Stephen H. Long, topographical engineer with the US Army Corps of Engineers. Long begins to explore the area under the orders of the Secretary of War, William H. Crawford. A former mathematics professor at West Point, Major Long noted that “a canal uniting the waters of the Illinois with those of Lake Michigan, may be considered of the first importance of any in this quarter of the country. The water course between the River Des Plaines and the Chicago River needs but little more excavation to render it sufficiently capacious for all the purposes of a canal.”

He observed that the 80-foot opening of the river into Lake Michigan was obstructed by a sandbar nearly 70 yards wide. At this point, the water was not more than 2 feet deep. Major Long quickly considered removing the obstruction. He wrote “Piers might be sunk on both sides of the entrance, and the sand removed between them.” He observed that the river and its inland branches were of a depth that would allow a large variety of vessels. He pointed out that removing the sandbar would create “a safe and commodious harbor for shipping, a convenience which is seldom to be met with on the shores of Lake Michigan.”

The Canal that Changed Everything

As the frontier town of Chicago grew, many of the old problems remained. Movement of goods from farm to market was hampered by the muddy condition of roads. Many were confident that a canal would make travel much easier for farmers and other tradespeople. Once a farmer reached an access point on the canal, goods could be moved by boat. In 1822, Congress authorized construction by the State of Illinois of an Illinois River-Lake Michigan canal. The digging of the canal did not start until 1836 and ships did not pass through until 1848. But the canal jump-started a lagging economy. On anticipation of the canal, 150 houses and stores were built along the route and business bustled at last. In 1835, Chicago’s population was only 4,000, but by 1850, the population of Chicago had grown to nearly 40,000. Spinney, in his book, City of Big Shoulders, points out that many visitors to Chicago between 1850 and 1900 were struck by the numbers of shops and money-making opportunities. One visitor noted in 1855 that “(o)f Chicago itself, what can I say? It seems mad after money.” 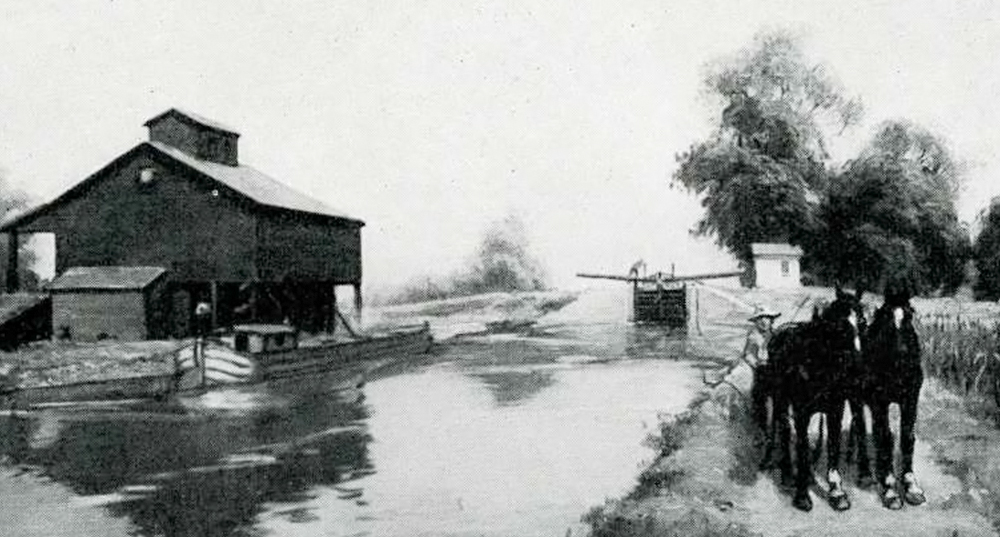 Travel from the Atlantic to the Gulf

Work on the Port made it possible to moor large ships with cargo from as far away as the Atlantic. True to Major Long’s prediction, a channel was dredged through the sand bar, and by 1835 large steamers hauling several hundred tons of goods could be accommodated as they arrived from Buffalo, New York and elsewhere. Harbor development by the Chicago District of the US Army Corps of Engineers continues to the present day.

Although the railroad took over in the movement of goods soon after the canal was built, the harbor and canal system indisputably awakened the commercial traffic that made Chicago the hub it is today. By 1900, the city’s population exceeded 1.2 million. Success in Chicago led to similar harbor work elsewhere. Initiatives to survey and improve harbor conditions at Erie, Pennsylvania and at Buffalo on Lake Erie as well as on the eastern shores of Lake Michigan soon followed. The age of commercial travel on the Great Lakes had begun and the City of Chicago had started it all.