An engineer’s ability to tackle a complex modeling project requires accurate and reliable baseline data. Centuries of discovery, research, and human ingenuity have produced data in the form of LIDAR, satellite imagery, digital elevation terrain data, GIS and more. But, this huge variety of data has not always been available. As this historic blog series has shown, maps as we know them now and details about our physical space were limited or non-existent for thousands of years. The first maps were pieced together in a haphazard manner and relied on second-hand information gleaned from travel narratives and other untested sources. Now we know that the best maps are created from first-hand information gathered from work on the ground. How did it all start? Thousands of years ago, human beings created settlements after years of nomadic life. With time, interest developed in setting boundaries, identifying private land and constructing buildings and community centers with some degree of precision and accuracy.

Scientists consider the ancient Egyptians to be the first people to have engaged in something resembling modern surveying. One of the first examples of a building that was clearly built with some mathematical precision was the Great Pyramid of Khufu in Giza, Egypt. Built around 2700 B.C., the building’s dimensions are exactly 755 feet long and 480 feet in height. It is placed in a north-south orientation and its angles are perfectly square, characteristics which alone suggest some analysis of the site was done before construction took place. Excavated relics suggest that the Egyptians were using basic tools at this time to identify boundaries and mark distances. Clay tablets found in what were most likely the first agricultural zones within the Euphrates and Nile watersheds show simple illustrations depicting land measurement. Illustrations found on walls around 1400 B.C. show the use of a rope with knots placed at equal intervals. Wooden rods with similar markings were also used to measure distances. 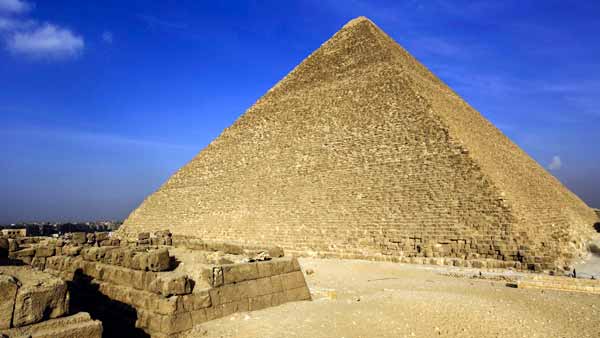 The Egyptians and Early Tools

Another early surveying tool used by the Egyptians was a kind of plumb-bob level constructed in the form of a wooden, vertical isosceles triangle. At the apex, a plumb-bob hung down past an index point on a horizontal bar. If the two supports were placed roughly at the same elevation, the plumb-bob would need to be aligned with the center of the crossbeam to establish a level surface. This device could also be used to survey larger distances by using a leveling staff placed at a distant point, sighting along the leveled triangle, and correcting any differences in height between the two. 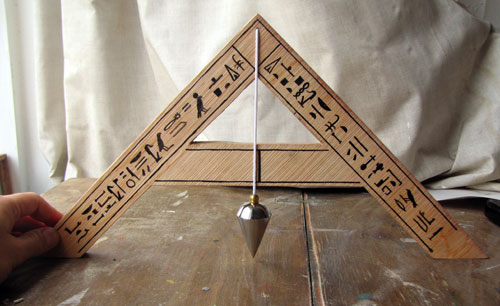 Triangular level was used by Egyptians to construct level surfaces

One tool used by both the Egyptians and Romans to determine right angles and to survey distances was the groma. Constructed of two horizontal wooden poles positioned at right angles in the shape of a cross (known as the stelleta), a plumb bob hung from each of the four ends. A team of surveyors (known as gromatici in Roman times) would work together with this tool. One set of men would use a staff to mark an approximate location some distance from the location of the ferramento, the central support for the groma. The surveyor with the groma would point one arm of the stelleta towards the distant point and adjust the groma until all plumb lines were in alignment. The groma could also be used to establish right angles and was handy in agricultural areas where square or rectangular plots could be easily marked. This tool, also known as the “surveyor’s cross,” was used extensively by the Romans and was key in establishing the empire’s vast system of highways. Using the Groma to assure right angles in construction

The astrolabe likely has its origins in Greece around the 2nd century BC. This instrument was able to measure the altitude of stars, specifically the angle at which they appeared over the horizon. The tool consisted of a simple arc attached to a cord. A pivoting pointer that could move over the graduations was directed at the point of interest in the sky. The astrolabe was used from ancient times through the Renaissance for a variety of purposes including measuring positions of stars and celestial bodies to surveying and triangulation, a surveying strategy to be discussed in a future blog. 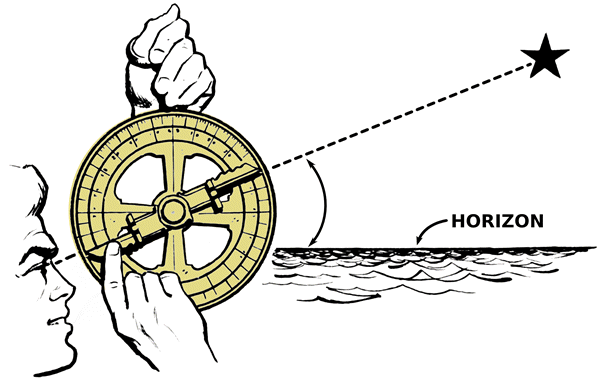 An Astrolabe was able to measure the altitude of stars

An Early Odometer, the Roman Water Level and Plane Table

Many tools used by the Romans were borrowed from the Egyptians. However, an early odometer and plane table were two inventions that were developed by the Romans. A Roman engineer and architect by the name of Vitruvius mounted a wheel of known circumference to a small frame that could be pushed along the ground much like one would push a wheelbarrow. When the wheel completed a rotation, a pebble would be dropped into a receptacle, allowing travel distances to be measured quite accurately.

The Romans developed a water level that consisted of a tube which was turned upward and held water. Each end point consisted of a sight made up of horizontal and vertical slits. Aligning these sights just above the water line ensured a level line for all types of projects, including the construction of the Roman aqueducts. The Romans also used a plane table extensively in the development of their elaborate system of roads and highways. The plane table was simply a drawing board positioned on top of a tripod or similar support. A straight edge with sights permitted the surveyor to target distant points to be mapped and draw lines on the table that corresponded with these distant objects. Later versions of the plane table included magnetic compasses.

Thousands of years ago, the Egyptians were only beginning to farm the rich soils of the Nile River Basin and make simple records about their immediate physical landscape. This period in time marked the beginning of the field we now know as surveying. It’s interesting to see how far we have come.