The massive volume of water that makes up the Great Lake ecosystem boggles the mind. Consider that the Lake Superior basin alone contains the largest quantity of freshwater found anywhere in the world. According to Dan Egan, author of the recently (2017) published and much acclaimed book, The Death and Life of the Great Lakes, the water contained in Lake Superior is enough to cover the North and South American continents completely with water to a depth of one foot. There are four other lakes in this formidable system of interconnected waterways: Lakes Erie, Ontario, Michigan and Huron. Collectively, the lakes make up nearly 25% of the global supply of freshwater and 84% of the supply in North America. But formidable natural systems often mask hidden vulnerabilities. Egan calls the Great Lakes system ecologically naïve because this network of lakes remained isolated from other aquatic systems for most of its evolutionary history. According to Egan, the relative isolation of the Great Lakes made them vulnerable to attack. Attack by whom, you may ask…? This key question leads us to the subject of this article.

The Trickle that Became the Flood: The First Canals and Seaways

Not surprisingly, modern civilizations, in their drive to engineer, endlessly tinker with, and configure the landscape for the “greater good”, can accidentally cook up some unintended impacts. Back in the mid-1600s, European explorers set the ball rolling in efforts to make the Great Lakes accessible to International travelers and commerce. The first recorded attempts to dig a channel around the rapids of the upper St. Lawrence river took place around 1689. This effort was followed in 1793 by a canal equipped with three locks running along the northern shoreline of the St. Lawrence River. Another canal system over 8 miles long that bypassed the Lachine Rapids was built in 1825 with a series of locks that raised boats about 45 feet. From this point, boats from the Atlantic had a pretty clear passage into Lake Ontario.

In the 19th century, dreams of making the shorelines of the Great Lakes the “Fourth Seacoast” loomed large and some thought Duluth, Minnesota could rival New York City as a port for world trade. This historic effort to open up the Great Lakes Basin to overseas opportunities led to an era of unprecedented construction as states hustled to put the needed transportation infrastructure in place.

‘Fifteen Miles on the Erie Canal’

The Erie canal established the first real corridor to the sea, climbing 568 feet in elevation and winding 363 miles from Albany, New York to Lake Erie. At a mere 40 feet wide and 4 feet in depth, it quickly became clear the canal was undersized. Even with periodic expansions, it was unable to accommodate the larger sea-faring boats that continued to be built. The St. Lawrence Seaway was designed to fix the problem of undersized canals, but at 80 feet wide it was still considerably smaller than the Panama Canal and Egypt’s Suez. In fact, soon after the Seaway was completed in 1956, it was unable to accommodate newer container ships that were over 100 feet wide. 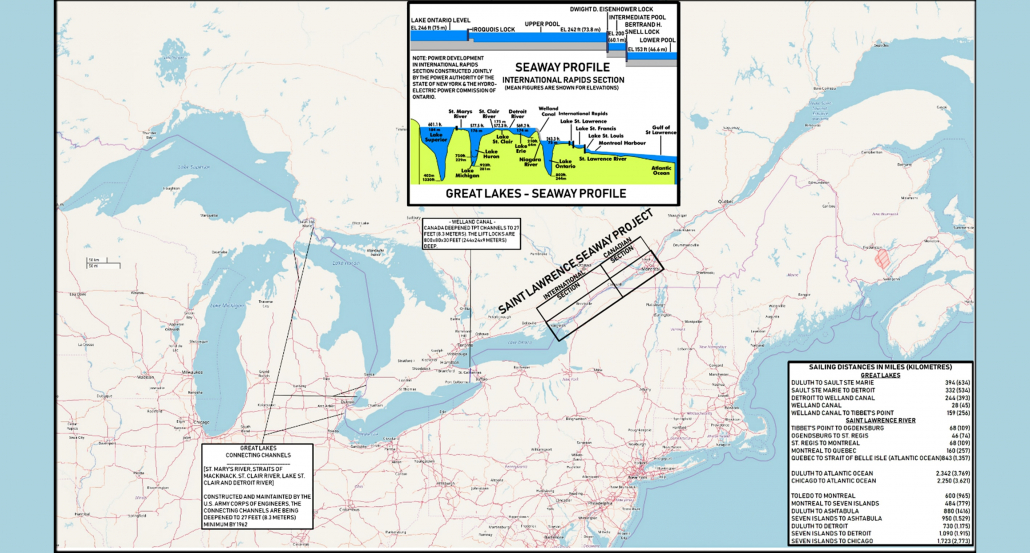 Combined with the seasonal difficulties posed by frozen locks and icy conditions, travel through the Seaway’s locks was tough. The Seaway also couldn’t compete with the growing efficiencies of travel by rail or highway. According to Egan, despite the massive, multi-decade effort to create the infrastructure necessary for international trade, Seaway’s current international traffic accounts for less than 5% of the total. But this statistic is irrelevant when it comes to creating passage for exotics. Years devoted to opening up the Great Lakes basin to international trade has eliminated the natural barriers that stood in place for thousands of years. The largest ships may no longer navigate the canals entering the Great Lakes, but the smallest exotics do.

Egan discusses the history of the most well-known invaders into the Great Lakes system with methodical and chilling detail. From the mode of entry, to the day the exotic was discovered (and by whom) to the strategies used or currently being used to stop its spread, the research presented is both thorough and fascinating. I felt at times like I was reading a gripping “who dunnit” mystery.

Most suspect that the sea lamprey managed to invade the Great Lakes when the Welland Canal underwent its final expansion. Deeper, colder water flowed down from Lake Erie, allowing the sea lamprey to migrate upstream. Regardless of the exact mechanism for its migration, the lamprey turned out to be a methodical and effective killer and, after its numbers reached a critical mass, the eel-like beast succeeded in decimating the once robust native lake trout population. The near complete obliteration of the top lake predators was followed by another disaster in the form of alewives, a river herring native to the East Coast. In the absence of the predatory lake trout, alewife numbers swelled. How to control them? The plan involved importing another set of exotics: Coho and Chinook salmon, which succeeded in controlling the alewife population and gave the Great Lakes sport fishery a major economic boost. The next shock to the Great Lakes system rolled in from overseas soon after, first in the form of the zebra mussel and then in the form of a related cousin, the quagga mussel. 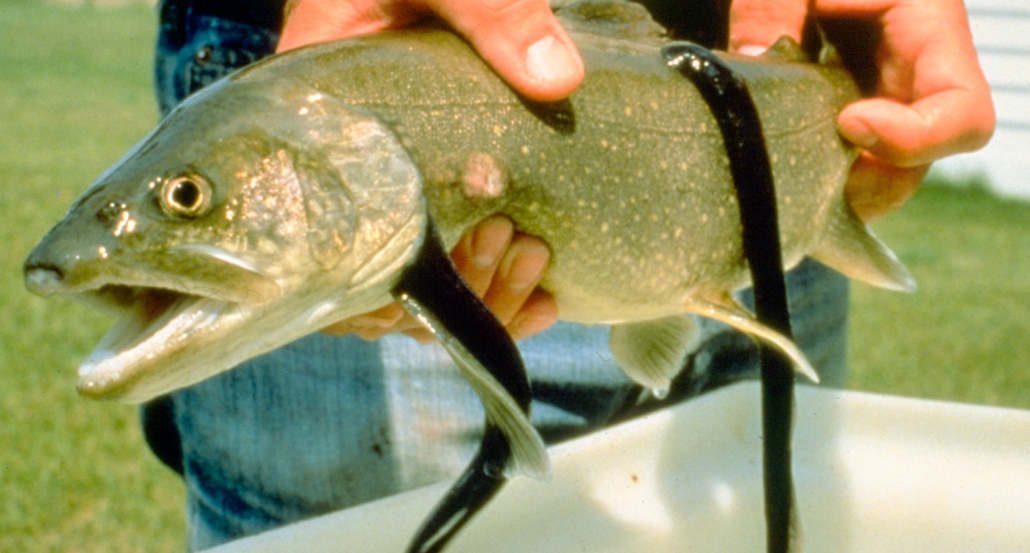 Set free to pillage and plunder the Great Lakes food web with the emptying of a single ballast tank of seawater, the quagga mussel decimated the base of the Great Lakes food web by competing with other filter feeders. In the mussel’s ability to clog intake valves, cling to ship hulls and hold fast to nearly any kind of moving or stationary surface, its method of spreading through the ecosystem was all but secured. As Egan points out, tucked in the hull of each ocean-going freighter or “saltie” was a fresh and entirely unique community of interdependent organisms, from exotic algae to bottom-burrowing worms, to spiny water fleas, poised to wreak havoc. 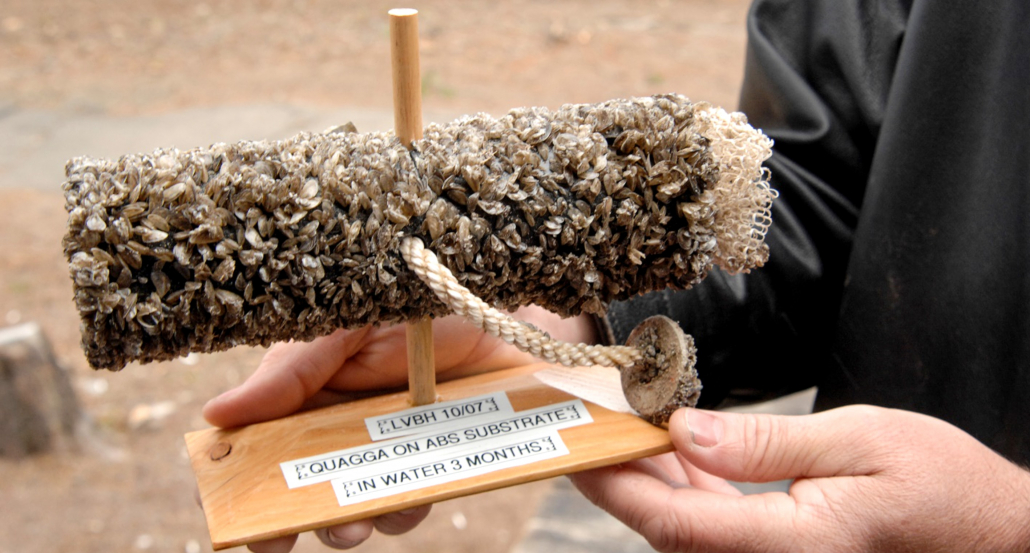 The St. Lawrence Seaway is not the only problematic corridor to the Great Lakes. Asian carp, a giant bottom feeding fish that was planted as a biological control method for weed control in Arkansas, is migrating upstream via the Mississippi basin and is dangerously close to entering the Great Lakes. Its genetic material has been detected in Lake Calumet, which is only miles from Lake Michigan. Hunting and fishing groups now join the usual cast of state and federal agencies in fighting an invasive fish that scientists claim could easily decimate a multi-billion-dollar sport fishery by outcompeting native species. One of the largest and costliest barriers of its kind in the world at $270 million, not to mention the $16 million annual operating costs, consists of several 8-ton steel bars in the Chicago canal that emit strong electrical charges that discourage the advance of carp. The U.S. Army Corps of Engineers has recently proposed a $778 million package of technologies for the State of Illinois consisting of water-flushing locks, bubble curtains, acoustic barricades and other tools for a few primary “choke points” to Lake Michigan. Next Stop: The Columbia River Gorge

Popular recreational spots around the country have been hit with exotics from the Great Lakes. Lake Mead now spends annually tens of millions on quagga mussel control alone. At the time of publication of Egan’s book (2017), Lake Powell had not yet been hit; as of 2018, it is considered infested. It seems no lake or river is too remote for the cunning of an exotic whose point of entry into the U.S. was thousands of miles away. On May 20, 2019 several agencies convened to stage an exercise, complete with mock command center, to consider emergency strategies to contain the spread of invasive mussels in the Columbia River Gorge. The mindset was not IF the quagga or zebra mussel will invade, but WHEN. Participants hoped to have a “well-tuned machine with leadership and procedures in place.”

When the St Lawrence Seaway was opened in 1959 and President Eisenhower, in company with Queen Elizabeth, presided over the celebration of the project that connected the huge inland freshwater sea with the bounty of the Atlantic, no one could have anticipated the consequences years down the road. Obviously, exotic species are constantly on the move with an endless network of travel corridors and canals around the world. Several principal travel corridors, from the Panama Canal to the Suez Canal, are currently undergoing expansion and with it comes bigger boats with greater opportunities for the spread of exotics. Could we as engineers and planners have anticipated the scale of the destruction and the associated expense caused by exotic mussels and other invaders into the Great Lakes system? Probably not. Does this mean we should stop all projects that have the potential to adversely disrupt ecosystems? Clearly no, because there are huge economic interests at stake and numerous benefits to consider as well. But with large-scale projects comes potentially large-scale impacts. Let’s take note.