The 16th century was a pivotal time in the history of mapmaking. By the 15th century, Europe was already deep in exploration and conquest. Marco Polo had already inspired an age of discovery and travel with his historic trip to China. Portugal had established itself as a power at sea and had sent numerous ships down the African coast. Spain was similarly fixated on establishing trade routes in the Pacific. With these exercises in empire-building and growth in world trade came an urgent need for more empirically descriptive maps. Discoveries in the fields of mathematics and astronomy also ushered in new expectations for precision and accuracy in geographic representations. Schools of cartography were established in several cities in Europe. The Flemish cartographer Gerardus Mercator (1512-1594) was a graduate of the University of Louvain’s School of Cartography and a prominent mapmaker of the time. Mercator’s rise marked a shift in the center of map publishing from Italy to the Netherlands. His rise would alter the course of cartography for all time. 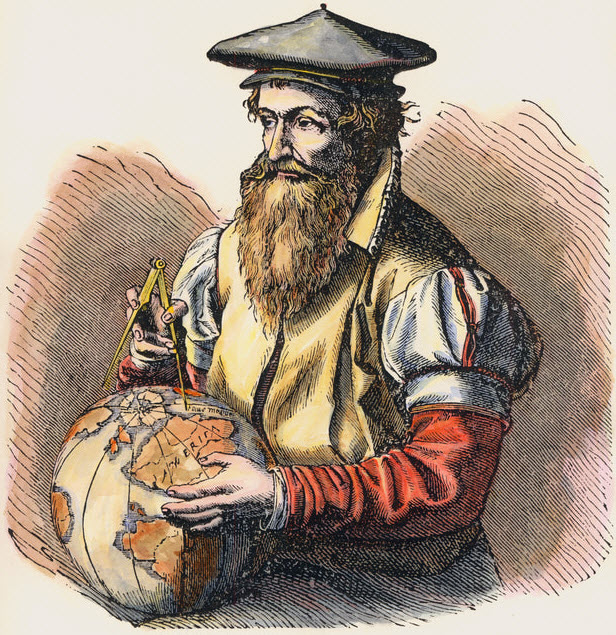 Why is Mercator significant? He was the first geographer to use the name “North America” in his 1538 world map. He was also the first to refer to a collection of maps as an “atlas.” Most importantly, however, Mercator was key in the development of the standard Mercator projection, which later spawned the widely used ellipsoidal version of the transverse Mercator projection. This cylindrical projection is the most commonly used for large scale topographic maps and is similarly central as a template for plane coordinate systems. GIS maps are typically referenced to the UTM or Universal Transverse Mercator grid system. Both the standard Mercator and transverse Mercator are conformal, which means that angles and shapes are well preserved within small areas; distortions in the size of landforms, however, become apparent at higher latitudes. Here’s the fundamental question: How did Mercator’s projection become key to modern mapmaking?

As discussed in our previous Tales in Geography article, the maps of the famous Greek scientist and philosopher Ptolemy enjoyed a revival during the Renaissance. Unlike most maps of the 15th century that were still being drawn in a free-form, artistic style, Ptolemy’s maps were mathematical and precise. Ptolemy’s grid system established a framework within which to identify one location relative to another. Gerard Mercator introduced even more “scientific rigor” to the process of mapmaking. He was an intellectual and though trained for the priesthood, he developed a keen interest in geography early in life. By the age of 25 he had achieved a mastery of mathematics, geography and astronomy. In 1538, he published his first world map to widespread acclaim. Mercator spent the next thirty years studying geography, travel narratives and navigational practices in preparation for the ground-breaking map projection that would make him famous. 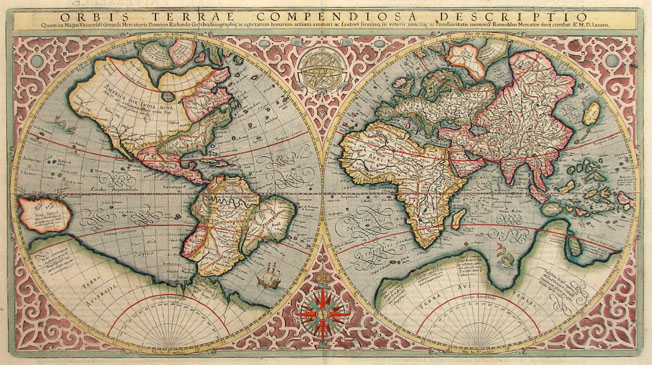 Limitations of Ptolemy’s Grid System and the Issue of Projection

A recurring issue during this time period was the tricky matter of projecting the earth’s surface onto a two-dimensional surface. No less than twenty-three map projections were in use during the Renaissance; fourteen of those were created between 1426 and 1600. Before Mercator, the preeminent maps in use had been based on Ptolemy’s grid where each degree along a line of latitude or longitude was of equal size. Mercator concluded that a more realistic method of projection needed to take into account that the earth was spherical. A method in which the ratio of latitude to longitude remained constant across the entire map led to a distortion of longitudinal values near the poles. Mercator worked to develop a method that would capture the curved longitudinal meridians and parallels of latitude on a two-dimensional surface.

Mercator’s map charts lines of latitude and longitude as straight lines intersecting at right angles, similar to other representations. But on Mercator’s projection, while the meridians are shown as vertical lines that are equidistant from each other, the parallels of latitude are charted as horizontal lines that are farther apart at the poles and closer together at the Equator. This variability in spacing compensates for amplification of the east-west distance between adjacent longitudinal lines closer to the poles.  So the inevitable east-west stretching is accompanied by a similar north-south extending. The Mercator chart became a standard projection for nautical purposes and was indispensable at sea. A straight line on Mercator’s map represented a course of constant bearing, one that maintained the angles with the intersection of each meridian, and permitted a mariner to get from point A to point B by following one line. Prior to Mercator’s maps, a ship would need to constantly change bearing at each meridian to follow a true loxodrome or rhumb-line (a line of constant course).

During the 16th century, Mercator’s projection represented a truly revolutionary development in nautical cartography. But, it was slow to gain traction in other areas. Not until the late 19th and 20th centuries did it become widely used in the publication of world maps. Its widespread use for all kinds of commercial and educational purposes, however, led to criticism in later years. It’s clear that Mercator’s projection distorts the size of landmasses that are at higher latitudes. Greenland and Antarctica appear very large compared to the continents nearer the equator like Central Africa.  Greenland appears to dwarf South America in size when in reality it represents only a fraction of South America’s landmass. Alaska similarly rivals Brazil in size on a Mercator map when in actuality Brazil is nearly 5 times as big. Because of these discrepancies, some argue that at latitudes greater than 70 degrees north or south, the Mercator projection is without much value. Mercator succeeded in representing the earth’s continents in a tidy, rectangular format. But in achieving this feat, some claim he distorted reality and perhaps inadvertently shaped the course of world affairs. Did the relative size of Europe in Mercator’s representation legitimize its use of colonial powers in Africa? Did Mercator’s map mislead and did the resulting confusion alter world history? 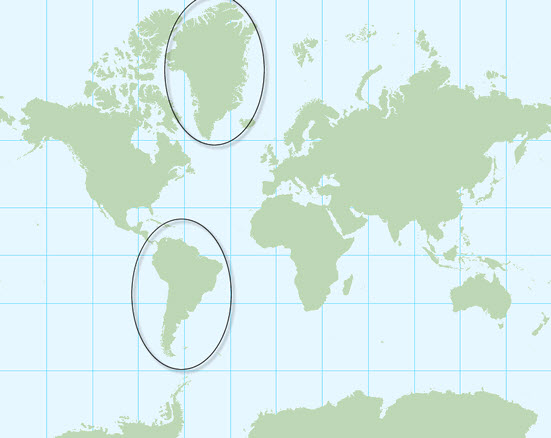 Modern Applications of the Projection

Revolutionary developments inevitably create some controversy. But modern applications of Mercator’s 16th century vision are everywhere. Internet-based mapping applications are predominantly based on this age-old projection. Note Google Maps, Bing Maps, ESRI Maps, OpenStreetMap, MapQuest and others, all of which benefit from the ability to zoom to a larger scale while preserving spatial accuracy. First conceived several hundred years ago when mapmaking was only beginning to be something more than an artistic exercise, Mercator’s projection takes us into the future with GIS, ESRI, and other geo-referencing technologies. In fact, our GeoHECRAS relies on the Mercator’s projection (among others) to allow you to georeference your HEC-RAS model to real world coordinates. The (Symbiotic) Relationship Between Employer and Employee

The Era of User-Friendly Design