“We had accomplished an object of laudable ambition, and beyond the strict order of our instructions. We had climbed the loftiest peak of the Rocky Mountains, and…standing where never human foot had stood before, felt the exultation of first explorers.” John C. Frémont around 1842
(Jackson and Spence, 1970, p. 45).

These are the words of Lieutenant John C. Frémont as he guides his men on the celebrated expedition of 1842 up what is now known as Frémont Peak in the Wind River Range of the Rocky Mountains. As his men assembled at the top, temperature and barometric readings were recorded, providing scientific data of the route that many western-bound settlers would follow as they traveled the Great Plains and beyond. 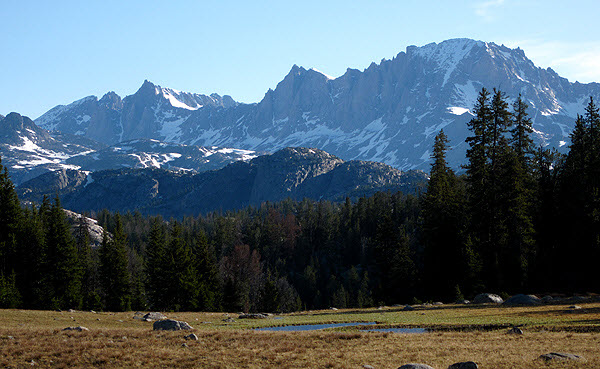 Born in 1813, Frémont is a national figure for a number of reasons: his role in providing the first definitive report, survey and map of the Oregon Trail to Congress; his reputation for defying authority and taking monumental risks in the Rocky Mountains; his role in bringing California into U.S. territory; and his unsuccessful bid for the presidency. This blog entry is about what many consider Frémont’s most important contribution: his official surveying trips of the Oregon Trail and his role in shaping the course of westward expansion.

From Lewis and Clark to the
Corps of Topographical Engineers

The Louisiana Purchase of 1803 set the scene for the Lewis and Clark expedition of 1804-1805. Commissioned by Thomas Jefferson to explore the newly acquired territory, declare U.S. sovereignty, and find passage through the Rocky Mountains to the Pacific Ocean, this was one of several trips organized soon after U.S Independence to set up land claims and conduct basic reconnaissance.

In 1838, Congress created the Corps of Topographical Engineers. The charge of the agency was to explore, compile data and determine routes for commerce, particularly for transcontinental rail. Under the Corps’ authority, expeditions were more organized than in the past and defined by specific duties and goals. Surveying instruments and other scientific tools were to be used to inventory flora and fauna, record data and compile a serviceable body of information about the land. Exploring and inventorying the frontier in a more methodical fashion was at this time a bona fide national preoccupation.

Early Duties with the US Army Corps

Frémont was a personable and gifted young person who was highly skilled in mathematics and engineering. Following a brief stint as mathematics instructor on the USS Natchez, he was soon offered the position of second lieutenant with the Corps of Topographical Engineers. His earliest years with the Corps consisted of exploring the Mississippi, Missouri and later, the Des Moines River under the guidance of the famous French scientist, Joseph Nicollet. In 1841 he married Jessie Benton and in cooperation with her father, Senator Thomas Hart Benton of Missouri, became an impassioned supporter of the U.S. government’s Manifest Destiny Initiative.

A Scientist and Explorer Named Frémont

Frémont’s growing competence and skill was noticed by many and soon led to an assignment from Congress to lead the first expedition out west in 1842. He assembled his team, which included the legendary frontiersman, Kit Carson, and a very competent, although frequently disgruntled German cartographer by the name of Charles Preuss. Four expeditions were to follow, each with a different route and goal. Although the primary objective was to map the land, many historians suggest that a secondary, covert goal was to bring additional territory under U.S. jurisdiction. 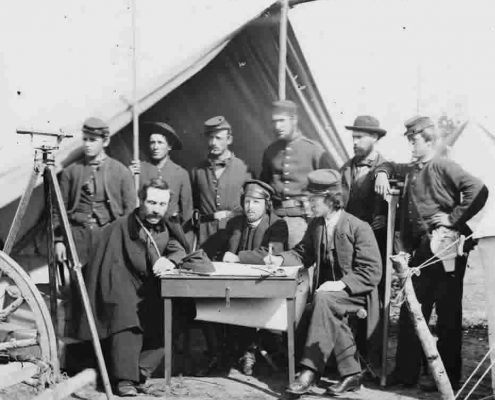 Each expedition was somewhat better outfitted than the last. The 1843 expedition that started off from Kansas City consisted of 39 adventurers and experienced mountain men. During the course of Frémont’s reckless decision to cross the Sierra Nevada range during the winter, nearly all perished. A tendency to overstep authority and go beyond the expedition’s scope, often at the peril of his men, characterized Frémont’s track record. Some considered him a hero, others an egocentric lawbreaker. Frémont’s assignment to gather data on topography and land forms is described in the following letter outlining his duties. Col. J.J. Abert of the Corps of Topographical Engineers writes to Frémont from Washington in 1845:

“The general outline of Captain Frémont’s duties is indicated in the annual report from this office. He will strike the Arkansas as soon as practicable, survey that river, and if practicable survey the Red River without our boundary line, noting particularly the navigable properties of each, and will determine as near as practicable the points at which the boundary line of the U. S. the 100th degree of longitude west of Greenwich strikes the Arkansas, and the Red River. It is also important that the Head waters of the Arkansas should be accurately determined.“
(Jackson and Spence, eds., 1970, p. 45).

Frémont would accomplish these mandates and others as well.

Through the Plains and the Rockies

Lieutenant Frémont’s attention to gathering data as well as making descriptive observations of the landscape are clear. Here is an example of a typical journal entry:

“Neither stream was fordable, and the necessity of making a raft, together with bad weather, detained us here until the morning of the 11th; when we resumed our journey along the Republican fork. By our observations, the junction of the streams is in latitude 39° 03′ 38″, longitude 96° 24′ 56″, and at an elevation of 926 feet above the Gulf of Mexico. For several days we continued to travel along the Republican, through a country beautifully watered with numerous streams, handsomely timbered; and rarely an incident occurred to vary the monotonous resemblance which one day on the prairies here bears to another, and which scarcely require a particular description.”
(Jackson and Spence, eds., 1970, p. 60).

At least one individual on the trip, the cartographer Charles Preuss, viewed Frémont as more attuned to his instruments than his men. The team brought a chronometer, telescope, a daguerreotype camera and an inflatable rubber boat on the trip, as well as other gadgets. Frémont, in characteristically confident fashion, was quick to point out the significance of his reports and surveying work:

“This map may have a meagre and skeleton appearance to the general eye, but is expected to be more valuable to science on that account, being wholly founded upon positive data and actual operations in the field…almost every camping station being the scene of astronomical or barometrical observations.”
(Short, 2003, p. 125).

In fact, this attention to detail and careful recording of land features is what would set Frémont’s expedition apart from those that came before him.

Frémont as Hero and “Pathfinder”

These expeditions sealed Frémont’s growing reputation as an individual who could get things done, earning him the name, “the Great Pathfinder of the Rockies.” Many mountain men had preceded Frémont, climbing the same peaks and traveling the same routes. Frémont’s journal entries show that his expedition team frequently passed wagons of settlers already moving west along the trail. But, as author David Roberts points out, the knowledge of the mountain men who came before Frémont was essentially useless because it could not be widely shared with the public. Roberts writes, in his book, A Newer World: Kit Carson, John Frémont, and the Claiming of the American West:

“The cardinal contribution of Frémont’s first expedition, as well as the pedestal of his fame, lay in the map his expedition produced (the best yet drawn beyond the Mississippi) and the report he published (at the time, the most stirring, romantic, and influential narrative of the western frontier to appear in English.)”
(Roberts, 2000, p. 127).

When Frémont’s report came out, entitled, A Report of an Exploration of the Country Lying Between the Missouri River and the Rocky Mountains on the Line of the Kansas and Great Platte Rivers, Congress printed a thousand copies (considered a large amount at that time). Congressmen as well as the general public devoured the report that both romanticized the West but also described its great potential for agriculture and industry. It seemed nothing could now contain the massive popular urge to move westward.

“With Preuss’s superb maps illustrating the route, the report served as a virtual guidebook to the Oregon Trail.”
(Roberts, 2000, p. 125).

Later Years and a Political Career

Following his career as engineer and explorer, Frémont served as Senator from California in the United States Senate and later as Governor of the Arizona territory. In 1856, Frémont was selected as the Republican party’s presidential candidate, but was unsuccessful in his bid for office. Without doubt, his years as feisty surveyor and intrepid explorer mark his “claim to fame” in the record books of early U.S. cartographic history.

The Era of User-Friendly Design