An interesting article ran in ASCE’s (American Society of Civil Engineers) Journal of Leadership and Management in Engineering in 2008. Robert W. Clark, P.E., authored a piece about two well used bridges in Stuyvesant, New York. One of the bridges had passed safety inspections by the State DOT every year. The other bridge, owned by CSX Railroad, had also apparently cleared corporate safety standards. Clark inspected the bridges and determined that they posed a danger to the public and the environment. The local press covered the story, the state DOT revisited the scene, and the bridges were closed for public use.

This is only one published case study, but without a doubt the basic facts and story line could be replicated in any number of communities throughout the nation. And we’ve all seen it: Pot-hole ridden roads, urban landscapes reminiscent of a post-apocalyptic disaster zone, and crumbling inner-city highways. The ASCE published the 2013 Report Card for America’s Infrastructure and outlined the condition of different sectors of the U.S’ s built environment.

The report made several unfortunate, but telling conclusions. One was that on a national scale, 66,749 bridges out of a total of 607,380 are structurally deficient. The structurally deficient bridges represent one-third of the total bridge deck surface area. So while smaller bridges are being repaired, those that are longer and greater in size go unrepaired. More often than not, these are metropolitan bridges that experience heavy use. Recall the catastrophic I-35W highway bridge collapse in Minneapolis, MN, shown below. The Federal Highway Administration estimates that the average age of highway bridges is 42 years. Greater than 30% of the nation’s bridges have exceeded their projected life span of fifty years. 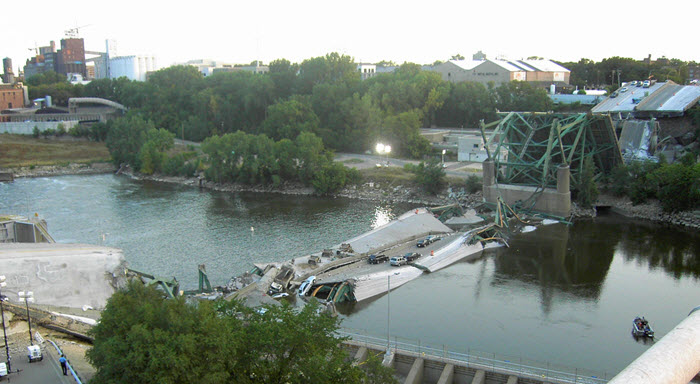 Following large-scale post-war building in the form of the interstate highway system and other public works, our world standing was looking pretty good. But the story is a bit different now. Data released in 2013 through the World Economic Forum shows that road conditions in the U.S. have lowered our global competitiveness score from 6.1 (out of 7) in 2006-2007 to 5.6 in 2012-2013. The U.S. slipped from its 7th place ranking in 2006 for the quality of its roads to number 20 in 2012-2013.

Weak Funding and Even Weaker Political Will

Over time it has become obvious that there is a significant disconnect between the U.S.’s appetite for cars and road expansion and the country’s ability to support the infrastructure, the bridges and roads, on which cars depend. The fact is that basic funding for the most fundamental level of maintenance is lacking. Beginning in the 1970s, the U.S. has been allocating a smaller percentage of its Gross Domestic Product (GDP) to funding for infrastructure. In the 1960s, the percentage of GDP allocated to infrastructure was approximately 5%; by the mid 1990s, this percentage had shrunk to 2.5 % and presently it stands at around 2%. This won’t cover the work that needs to be done now: The Federal Department of Transportation estimates that there is currently a $115 billion backlog in repairs for bridges.

How We Pay for Repairs Now

State and federal fuel taxes are the primary source of funding for the Highway Trust Fund. The revenues generated from this source regularly fall short as a result of tax rates that have remained the same since 1993 and changes in patterns of fuel consumption. Patch-up measures will only work for so long. Congress approved a $305 billion, 5 yr. highway bill in Dec. of 2015. But some predict that states are likely to slow down projects as the funding tapers off. Congress cobbles together short-term fixes to a problem that grows more massive every year. The bottom line is that there is no sustainable long-term funding in place to address existing and future infrastructure needs. The Federal Highway Commission estimates that we need $126 billion/year to maintain the existing system of highways; actual spending is much lower according to 2011 reports from the Congressional Budget Office.

Several strategies are being considered to increase revenues, at least in the short term. These include raising fuel taxes and increasing the use of toll highways, exploring public private partnerships (PPP), and using a vehicle mileage traveled (VMT) fee. Of these, the VMT fee seems to be the most likely to be adopted. Not only would it reduce traffic congestion, but it might encourage more efficient use of vehicles.

This isn’t just about isolated pockets of failing infrastructure, but about the state of the built environment as a whole in the United States. As engineer Robert Clarke clearly laid out in his article A Tale of Two Bridges: Dangerous and Still Standing, “The monumental effort that will be required to rebuild the constructed fabric of the United States is about to be forced on us and will be painful.” I couldn’t have said it better myself.

When an Idea Alone Isn’t Enough