USGS StreamStats
The USGS StreamStats command allows the user to click on a stream location in the Map View, and the software will delineate the watershed basin boundary, compute the basin characteristics, and provide estimates for flow based upon site-specific USGS regression equations. The software will generate a shapefile containing the determined watershed boundary and basin characteristics, as well as a PDF report for the selected site. 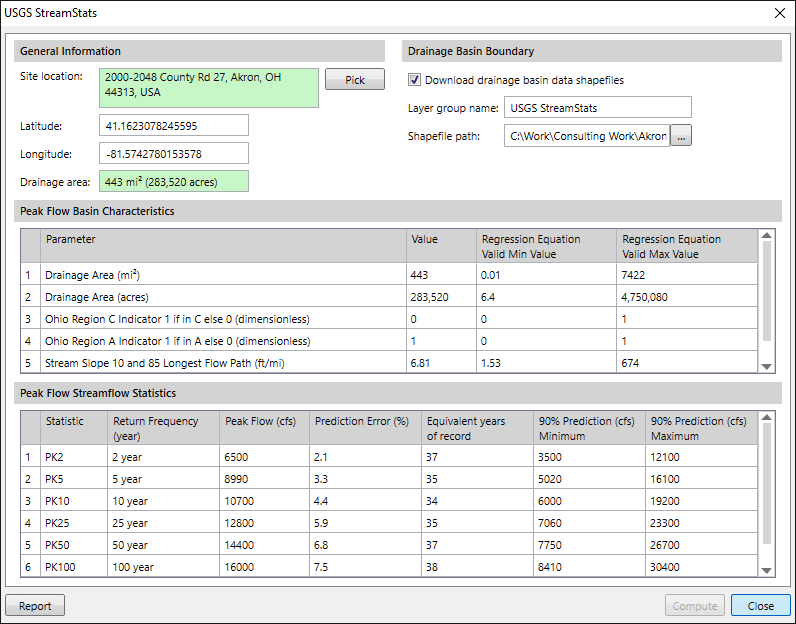 Hydraulic Calculator
For the defined HEC-RAS cross section, the Cross Section Data dialog box has a panel containing a built-in Hydraulic Calculator. This calculator allows the user to choose an unknown variable and the software will then automatically compute the solution after the user enters the known parameters. For example, for a given water surface elevation and energy (or bed) slope, the software will compute the discharge rate. It accounts for Manning’s roughness subareas, but does not account for ineffective flow areas, conveyance obstructions, levees, or lids. 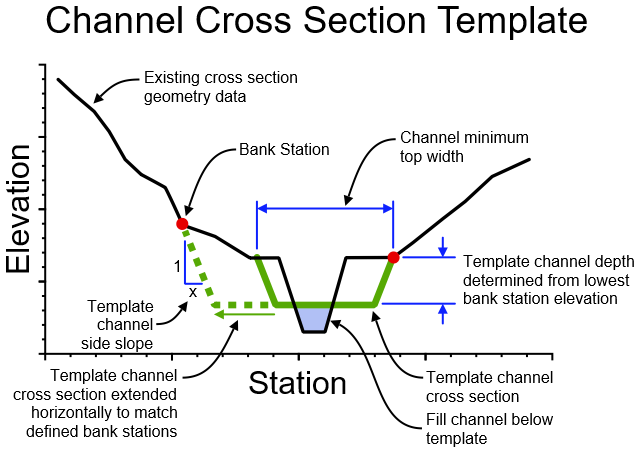 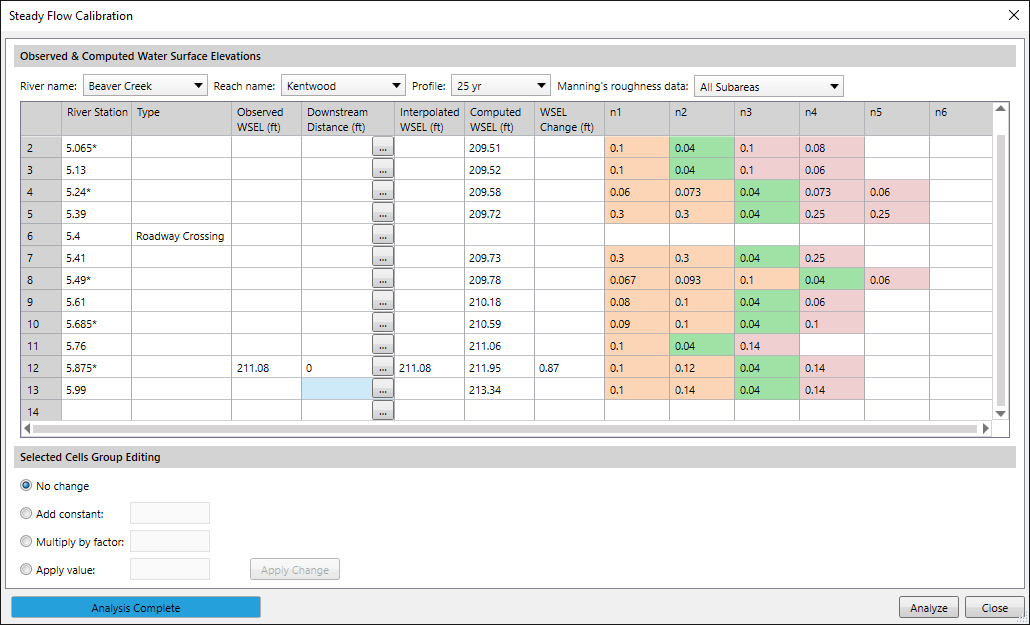 Duplicate Current Scenario
The Duplicate Current Scenario command makes an identical copy of the current scenario (plan). The user can optionally make a copy of the current geometry and steady flow data. This is helpful when the user needs to create different alternative designs for comparison—like when comparing different roadway crossing designs. 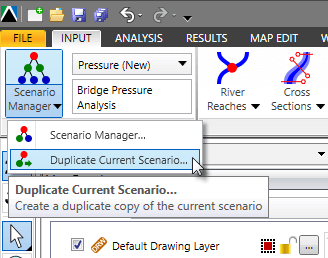 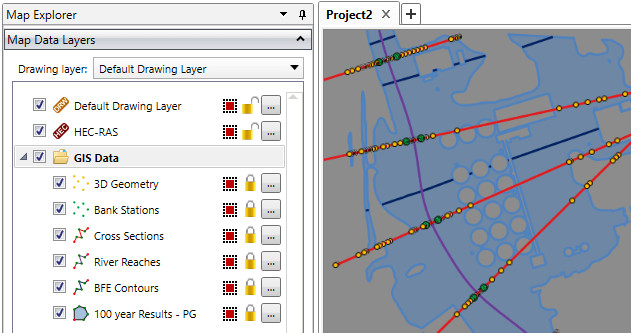 Roadway Crossing Geometry Adjustment
The Bridge & Culvert Data dialog box Geometry Adjustment panel allows the user to adjust the horizontal stationing of the upstream or downstream face bounding cross sections so that a standard reference station, such as the center of the river (thalweg) can be set to a specific station value (e.g., 0 or 1000). In this way, everything else can be referenced off of that reference station. In that way, the high chord (roadway) geometry, low chord geometry, pier locations, and culvert stationing can be more easily referenced with a common reference station. In addition, the high and/or low chord elevations can be adjusted to match an elevation datum. 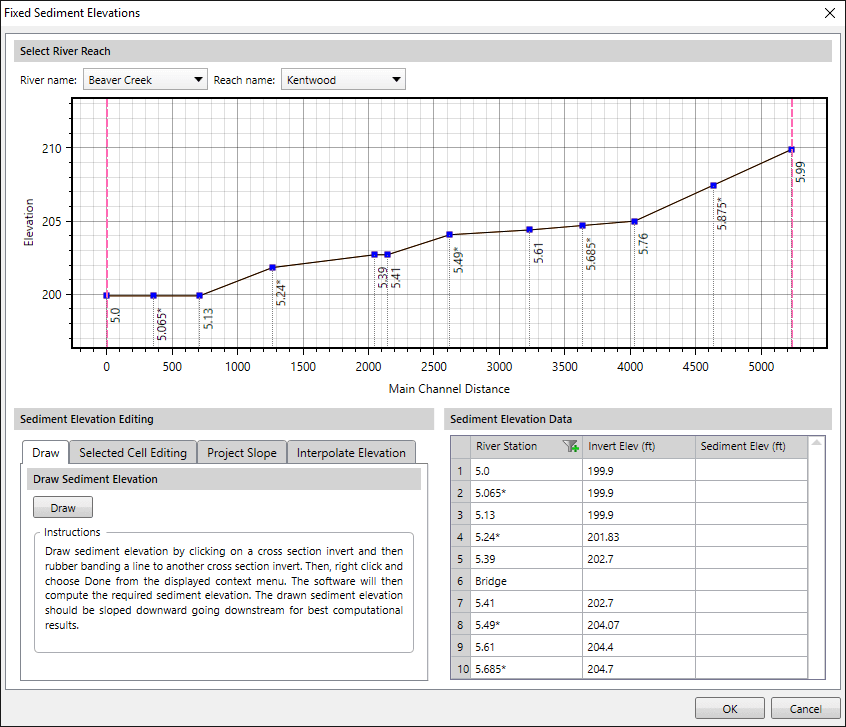 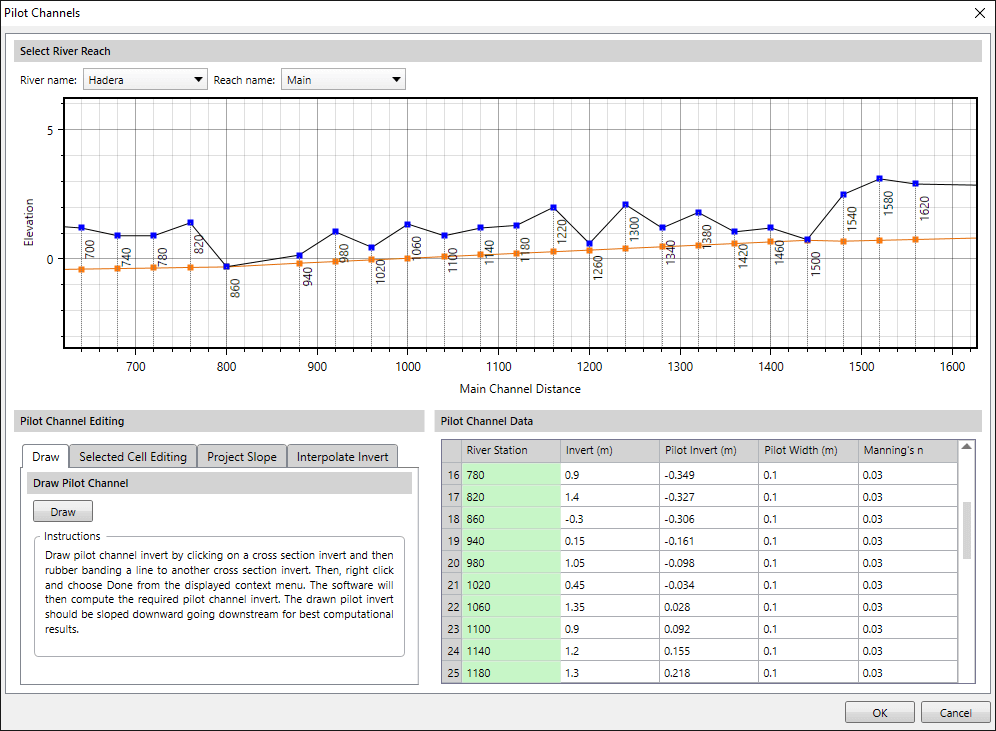 Flood Mapping for Large Terrain Models
Computing the flood map for large terrain models has been greatly improved. The software will slice up the terrain model into smaller chunks so that an accurate edge of water can be computed. In this way, the software is able to manage the level of detail based upon the terrain model cell size and keep performance and speed optimized around the computational and memory constraints of the user’s computer.

Generate Contours
The Generate Contours command allows contour lines to be generated for elevation grids. The user can specify major and minor contour line spacing, line weigh, line colors, and more. Elevation contours help the user in deciding where to place cross sections on the Map View to most effectively capture the flow area as the flow travels downstream. 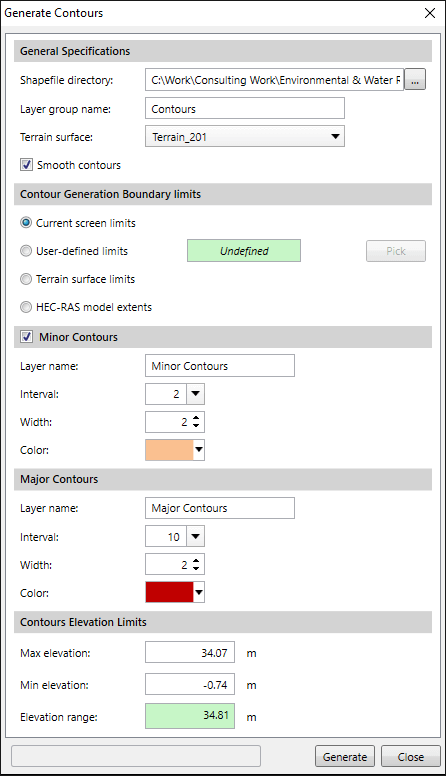 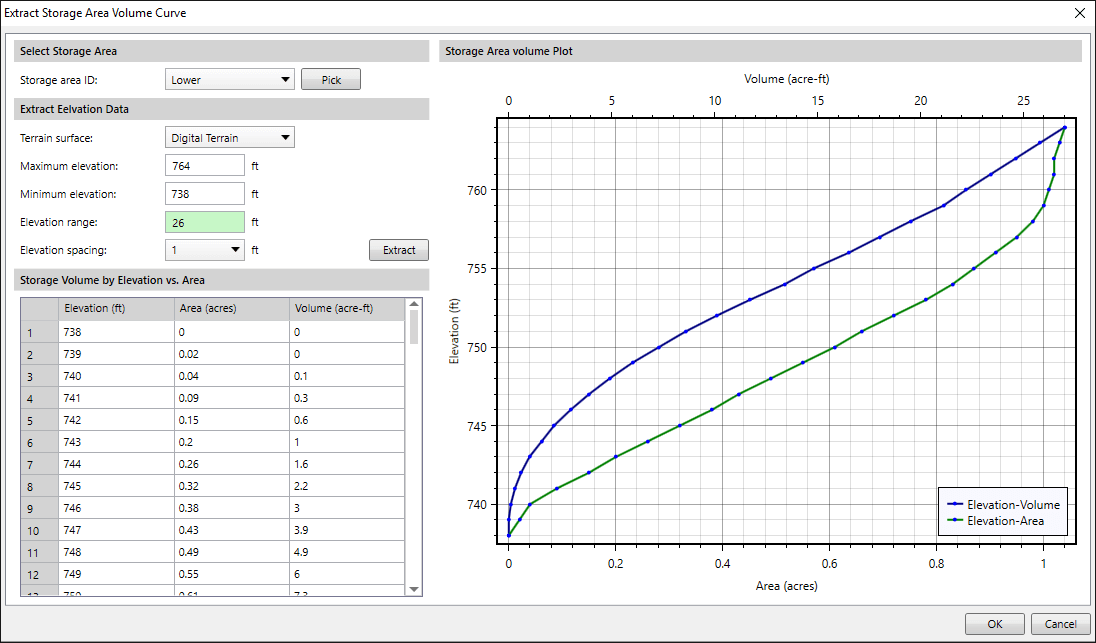 Progress Bar during Long Command Processing
To improve the user experience, a progress bar is now shown to help inform the user how long a particular process will take. It displays the progress of the command along with status messages. We have implemented this feature for some commands, such as loading a CAD file and generating a flood map, and will add this feature to other commands as our software development efforts continue. 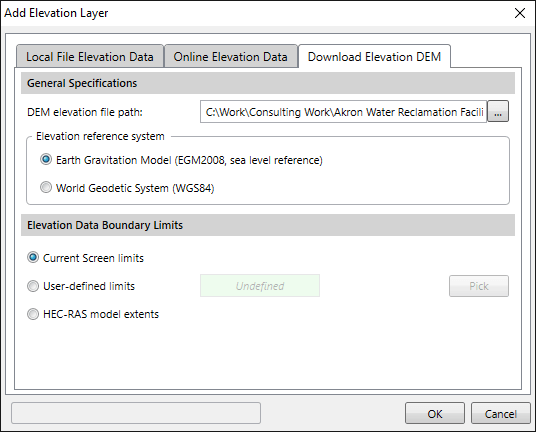 Editing of River Names and Reach Names
The user can rename a river and/or reach by double clicking on the reach name on the Map View. No need to display corresponding data dialog box.

Check-Out / Check-In Licensing Support
For both floating network licenses and cloud licenses, the user can check out a local workstation license for up to 7 days. After the check-out time period has expired and the license is not yet checked back in, the license is automatically checked back into the floating network or cloud license pool. This allows the user to check-out a local workstation license to a laptop computer and work on the software outside of the office. 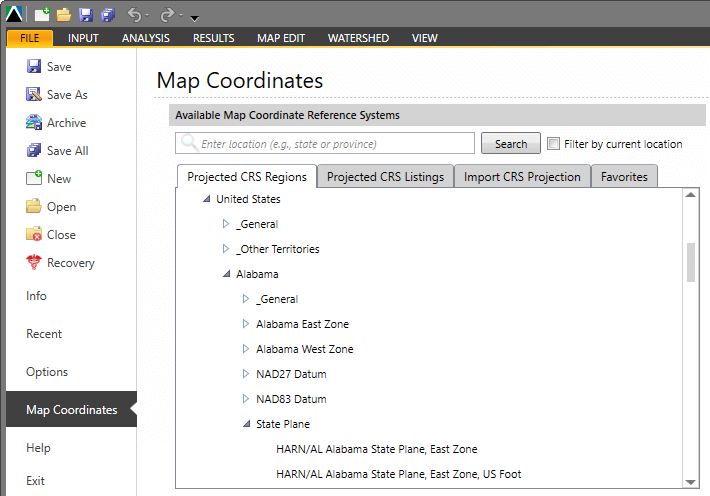 Improved Display of CRS Projection Details
For a selected coordinate reference system (CRS), the units are clearly shown in meters, international feet, and US survey feet.

Local CRS Support
When working with HEC-RAS models and project data that are not defined relative to any particular map coordinate reference system (CRS), but rather to a local CRS, the software now provides a Local CRS in the listing of available Custom CRSs. This allows the associated data to be pulled together on the same location within the Map View.

Additional Base Maps
Additional base maps and an improved USGS topographic map have been added.

Assign Manning’s Roughness using CAD Polygons
The Assign Manning’s Data command has been extended to support AutoCAD and MicroStation drawing files containing polygons. This allows the user to draw polygons on top of an orthophoto within AutoCAD or MicroStation, representing different roughness subareas. A default left overbank, channel, and right overbank roughness can be defined. The polygon’s elevation should be assigned equal to the associated Manning’s roughness. It is important that the drawing’s decimal precision be set high enough to allow enough significant digits in assigning the polygon elevations to match that of the associated Manning’s roughness.

Additional Node Name Support
The software will now display the node names on the Map View underneath the river station IDs. In addition, the user can perform table editing of the node names using the Edit River Stations & Node Names command. 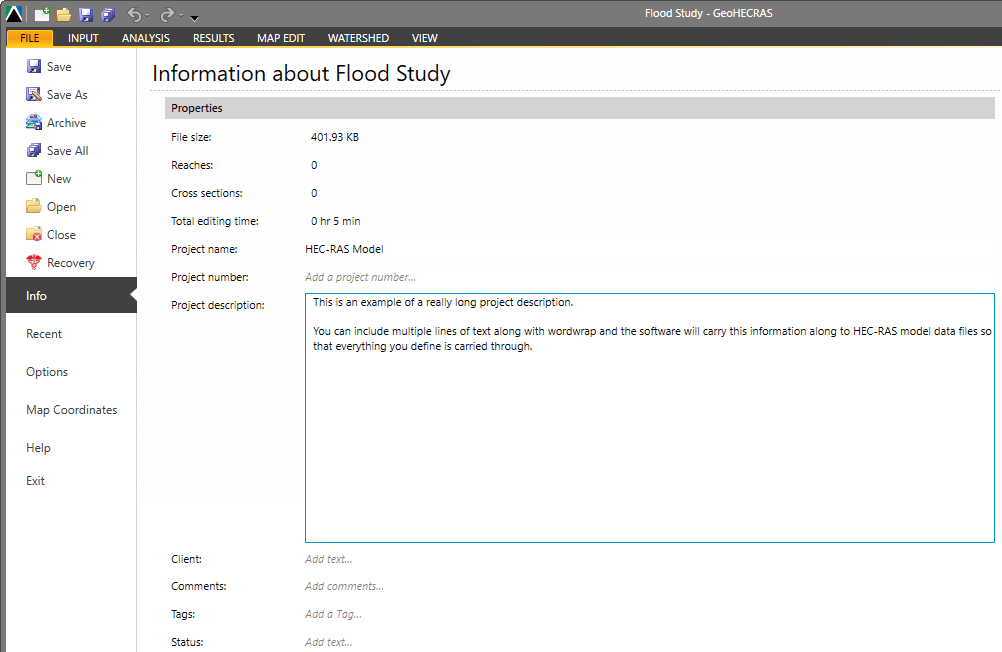 Compute Steady-Current Scenario dialog
The Compute Steady – Current Scenario dialog box now allows the user to select specific profiles to analyze, rather than analyzing all of the defined profiles. For example, the user may have the 2-Year, 5-Year, 10-Year, 25-Year, 50-Year, and 100-Year profiles defined. This new implementation allows the user to select from the list of profiles which profile(s) to analyze. 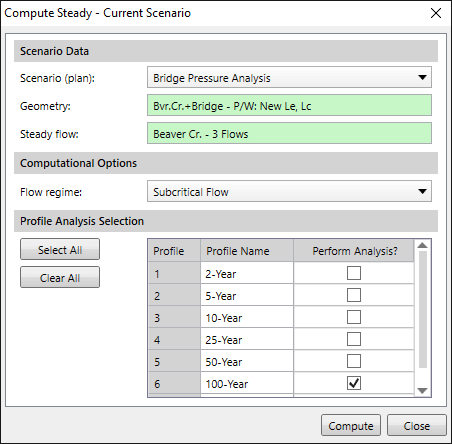 Scour Input Data Saving
Previously, when the user switched between projects, any defined scour data within the HEC-RAS Scour Calculator was lost. In addition, after the user closed the project, the scour data was lost. The software now remembers this data throughout the life of the project. 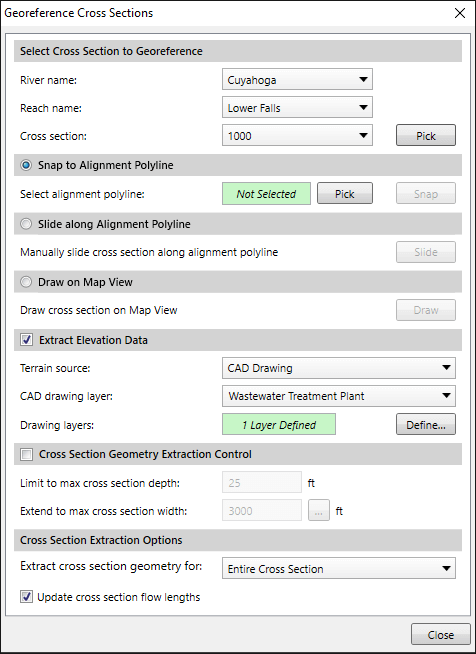 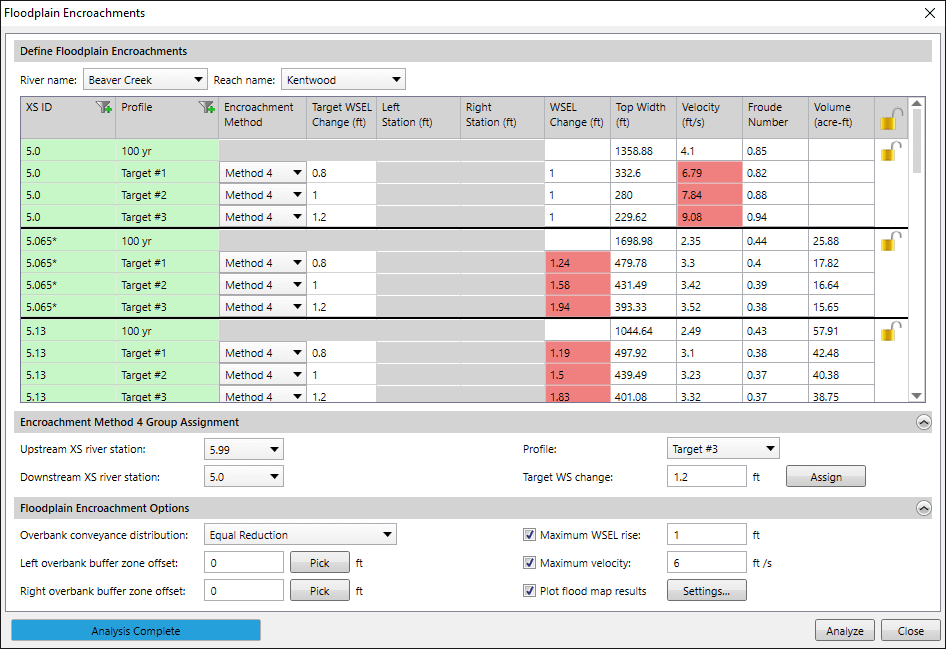 HEC-RAS Project Archive Improvements
When archiving a HEC-RAS project as a ZIP file, if the HEC-RAS analysis has been performed and the user has requested that the analysis results be stored in the archive ZIP file, the software will automatically include the HEC-RAS ASCII output report in the archive.

Improved Compression of Archived Projects
Three levels of ZIP compression are provided when archiving projects: Fast, Normal, and Best. Choosing “Best” will create the smallest ZIP file, but may take a longer time. In addition, the software will remember what ZIP compression level was last selected when creating an archive.

Increased Base Map Resolution for Exported HEC-RAS Models
When exporting the HEC-RAS model to AutoCAD, MicroStation or to the US Army Corps of Engineers software, the user can now specify the resolution to be used for the exported base map. This exported base map is stored as a pyramid image file with multiple resolutions, depending upon the zoom factor, using the JPEG2000 file format. 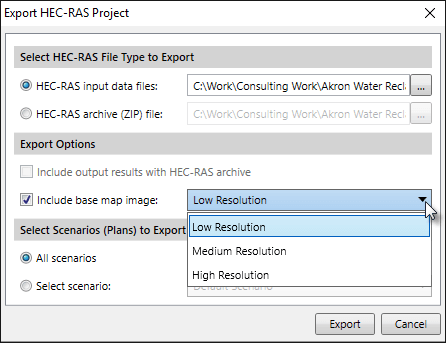 Download Update without Installing
The software update can now be downloaded without requiring the installation to happen. This is useful when the IT staff wants to download a single update and then roll the update out across the local area network.

Sorting of CAD Layers by Name and Visibility Status
The user can now sort the CAD layers within the CAD Properties dialog box based upon the layer name and visibility status. This makes it easier to see which layers are turned on or off.

CAD Drawing XREFs
The software now supports AutoCAD and MicroStation drawing files that contain external references to other drawing files. Included in the CAD Properties dialog box is a panel that allows the user to see the various externally referenced drawings and their associated details.

Improved Georeferencing of Imported Images and PDFs
The user can unlock the layer containing an imported aerial image or PDF and can then manually drag and rotate the image or PDF to precisely locate where it should reside.

Improved Color Shading of Elevation Grids
The color shading of elevation grids has been greatly improved using a new hill shading algorithm in order for the user to clearly see the elevation relief contained in the terrain. 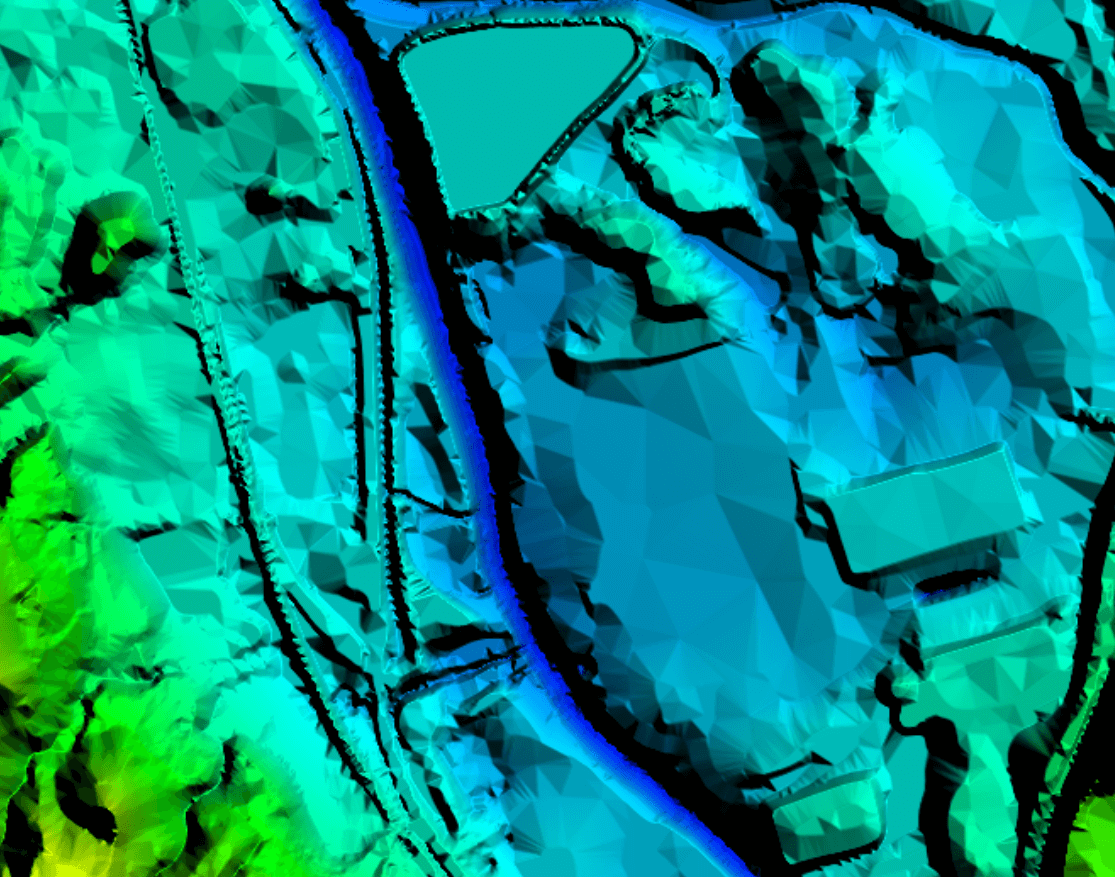 Improved Merge DEMs Command
The Merge DEMs command has been enhanced to support more complex DEM merging operations. The user can specify the merge order when working with multiple DEMs, as well as inform the software to select the highest elevation for the overlap area.

Rubber-banding while Digitizing in Cross Section Plots
While measuring distances and drawing polylines in the dialog box cross section plots, the software will now show a rubber-banding line so that it is easier for the user to see what is being measured or created.

Extended Conflate Command Support
The Conflate command has been added to roadway crossings, inline structures, and lateral structures. This allows the user to quickly assign survey elevation points to a structure. This command allows survey point data to be merged into HEC-RAS structural element. This command works with XYZ point files, AutoCAD drawings, and GIS point shapefiles. The user can define a buffer distance for the structural element and the software will automatically snap point data to the element. Snapping of survey data can be either perpendicular to the element or parallel to the river reach polyline. The user can restrict merging of survey data to channel only, left or right overbanks, both overbanks, or the entire structure cross section.

Uniform Scale for Roadway Crossing Plot
When plotting the upstream and downstream face cross sections at a roadway crossing, the software provides an option to use the same horizontal and vertical scale. This is useful when trying to compare the relative size of elements at both sides of the roadway crossing.

More Seamless Transition from and to 3D View
When transitioning between the 2D and 3D views, the software does a better job of maintaining a consistent field of view of the project data.

Not Defining HEC-RAS Project Name
When exporting out the HEC-RAS model, the project name was not correctly defined. This is fixed.

Incorrect Water Surface for Cross Section with Lids and Levees
For cross sections containing both levees and lids, the software incorrectly plotted the computed water surface elevation in the cross section plot of the Cross Section Data dialog box. This issue has been fixed.

Corrected Dam Breach Plot
The left and right slope of the dam breach was not correctly shown on the inline structure plot. This is fixed.

Conveyance Obstructions Not Showing on Roadway Crossing Plot
The software will now display conveyance obstructions on the roadway crossing plot.

Loss of Lateral Weir Alignment after Changing Structure Width
Changing the structure width of a lateral weir caused the lateral weir alignment to be lost. This has been fixed.

Tailwater Connection for Lateral Structures
The software would lose the defined lateral structure tailwater connection when the user moved to the next upstream or downstream lateral structure. This has been fixed.

Multi-Opening Roadway Crossings
In the Bridge & Culvert Data dialog box, we did not display the correct reference to the opening ID number. This has been fixed.

Manning’s Roughness for Multiple Culvert Groups
The software will now allow the user to define a different Manning’s roughness value for each culvert group.

Not Archiving Scour Model Input Data
The software will now include the scour model data with the archived project ZIP file.

Numerous Bug Fixes and Crashes
Many small bugs and crashes have been fixed.