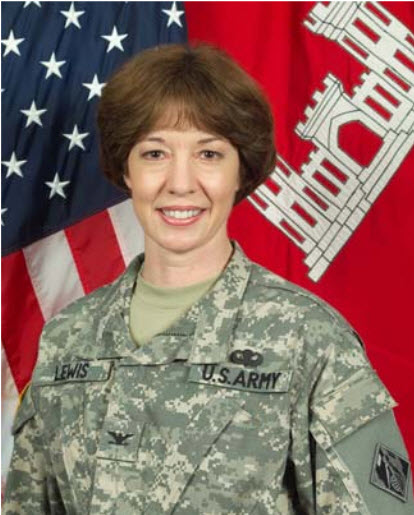 Colonel Debra M. Lewis assumed command of the Gulf Region Division Central District on June 18, 2006. As commander and district engineer, she is responsible for engineering and construction management support of deployed forces and Iraqi reconstruction in Baghdad and Al Anbar provinces, Iraq. The total program for Central District represents over 1400 projects valued at $2.6 billion.

Colonel Lewis’ experience in command and staff positions spans over 26 years. She served on the Joint Staff in the Pentagon where she supported the JCS Chairman’s responsibilities for combating terrorism before and after 9/11. Other key jobs have included company command in the XVIII Airborne Corps at Fort Bragg, N.C.; operations officer and executive officer of engineer battalions in Hawaii; Chief, Military Engineering Division, U.S. Army, Pacific (USARPAC), dealing with nations and U.S. territories throughout the Asia-Pacific region; and Staff Officer in the Congressional Activities Division of the Office of the Chief of the Staff of the Army.