There are several other workflow enhancements that have included in this update. Have a look! 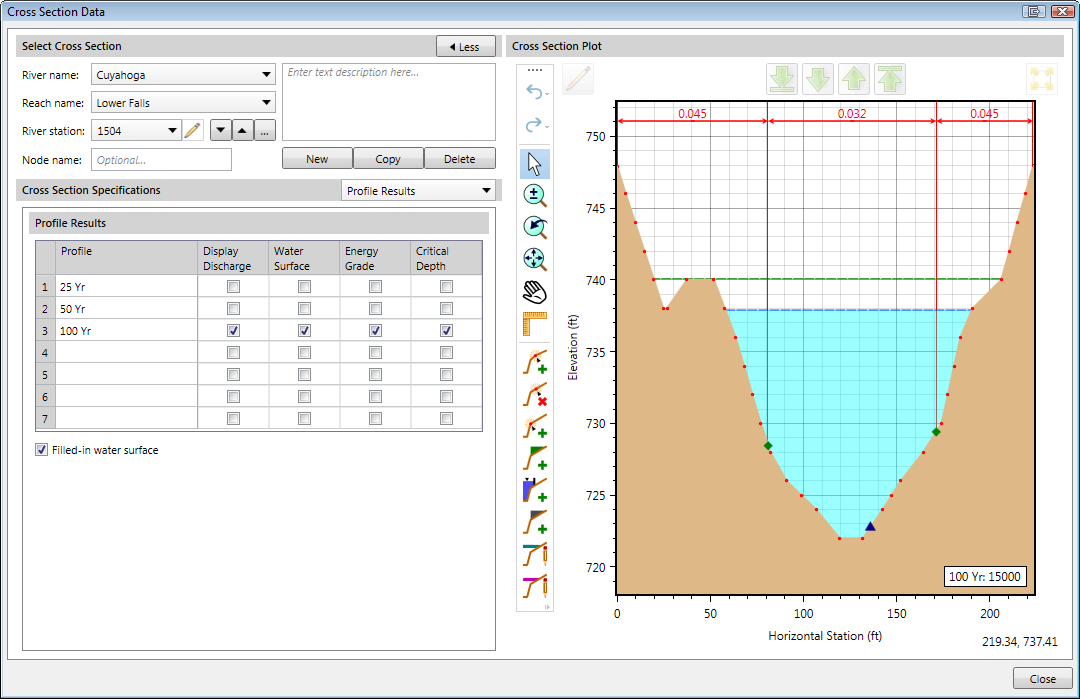 The software will display an analysis results comparison between a proposed and existing bridge or culvert structure, showing the computed energy grade elevation, water surface elevation, velocity, and flow area for the opening structure and for several upstream cross sections. The user can interactively adjust the proposed bridge or culvert design for the roadway crossing and the software will automatically update the comparison results. Near photorealistic real-time 3D rendering of roadway crossings, inline structures, and lateral structures are now constructed. Changing dimensions, culvert spacing, and elevations automatically updates the rendered structure. This allows the user to easily interact with, maneuver around, and change the structure design to gain perspectives impossible to capture in 2D. This improves how the HEC-RAS model is communicated inside and outside of the company. For example, it is simply easier to understand a bridge design when you can see it in 3D—as opposed to a 2D plot. Within the Map Data Layers panel the user can explicitly select the layer that new entities (other than HEC-RAS entities) are drawn to. This helps the user by “locking” the selected layer for digitizing new entities. Download FEMA National Flood Hazard Layer (NFHL) data as shapefiles on to the local computer for a user-specified region. The NFHL provides users with the ability to determine the flood zone, base flood elevation and floodway status for a particular geographic location. It also has National Flood Insurance Program (NFIP) community information, map panel information, cross section and hydraulic structure information, Coastal Barrier Resource System information (if applicable) and base map information, such as road, stream and public land survey data. A full list of available NFHL layers is provided in the download data dialog box. This command can be used to merge two or more adjoining and overlapping DEMs (Digital Elevation Model) into a single DEM. This is useful for creating contours, cutting cross sections, or generating a flood map from a single elevation source.

This command can be used to merge two or more adjoining polylines into a single polyline. This is useful, for example, when the user has stopped digitizing a long river reach and then started up again later. The user can merge the two river reaches into a single river reach.

User-defined summary profile tables are now supported. The software will automatically synchronize with any user-defined tables that are defined for the US Army Corps of Engineers HEC-RAS software.

Several major and minor enhancements have been added to the flood mapping command. The software can now construct an approximate or precise flood map. The precise flood map takes longer to compute than the approximate flood map. The user can specify the clipping boundary limits as well as whether to clip out any building footprints. In addition, river junctions for large river network models are better supported. Finally, for large river models, the user can restrict the flood map to be created for smaller regions so that a detailed flood map can be created.

The software is able to generate a river profile plot without the HEC-RAS model being completed. This allows the user to check that the defined cross section geometry and flow lengths are matching what was entered.

A metadata tab is now provided for most WMS (Web Map Service) layers, which provide details of when the web map was created, the originating data, and contact information for the map data. The dialog box used for defining the unsteady flow hydraulic parameters for bridge structures now includes a plot of the bridge opening to assist the user in defining the necessary parameters. 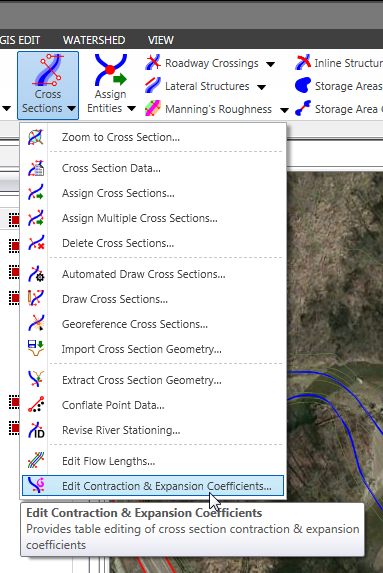 The user can directly edit the left overbank, channel, and right overbank flow lengths within a single table for the entire river reach. Data grids now provide a fill handle allowing the user to replicate an entry into the other rows within the data grid, similar to what is provided within Microsoft Excel. For example, the user can easily fill-in the same downstream boundary conditions for all of the defined profiles in the Steady Flow Data dialog box. Toggling of Map Layers While Digitizing

The software now allows the user to toggle various properties of the map layers within the Map Data Layers panel while digitizing. For example, the user can toggle the display of a layer ON or OFF file digitizing a polyline as long as the layer is not the layer being digitized.

The software now automatically computes the flow distance at a junction between the upstream and downstream river reaches. The user does not need to manually measure the flow length unless the flow traverses a path different than the defined river reach.

The software provides an ortho measure tool for measuring distances in the Cross Section, Roadway Crossing, Inline Structure, and the Lateral Structure Plots. 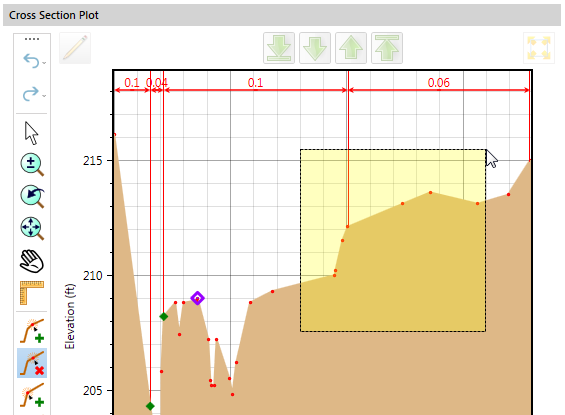 While measuring distances and areas on the Map View, the software now provides real-time feedback on the distance or area that has been measured. For example, this is helpful when attempting to accurately place a modeling element on the Map View.

The software can construct complete HEC-RAS geometry models from external GIS shapefiles. For example, river reaches, cross sections, bank stations, flow lengths, Manning’s roughness, levees and more can be automatically assigned from GIS shapefiles. All the user needs to do is assign flow boundary conditions and the HEC-RAS model is completed.

The software will now “guess” at which attribute field should be used based upon the field label name and field type. For example, assigning roughness regions using a GIS polygon shapefile using the Assign Manning’s Roughness command, the software will review all of the attributes contained within the shapefile and select what it thinks is the attribute to be used for assigning roughness to the cross sections.

The summary profile output tables now allow the user to define specific locations (i.e., cross sections, roadway crossings, inline structures) to include in the output table. In that way, the user can specify only those locations that are of key interest and the software will not display results for any of the other locations. 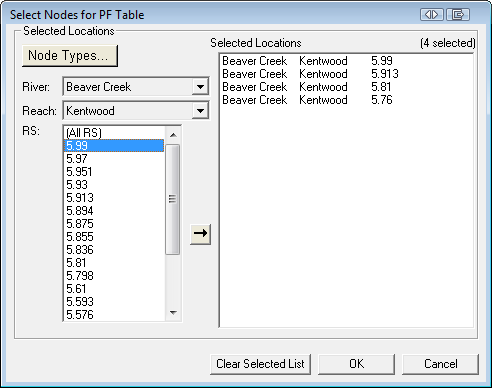 The software will now optionally include a map scale bar in the 2D Map View that is printed. Work is going on to implement this same functionality with exported PDF files. The software allows the user to draw the high chord and low chord geometry on the roadway crossing plot in the Bridge & Culvert Data dialog box.

Similar to AutoCAD, double clicking the middle mouse button will cause the software to zoom extents for the current layer or HEC-RAS layer if there is HEC-RAS data defined.

To improve performance for large GIS geodatabases (i.e., GDB and MDB files), the software will load layers only when they are turned on. In that way, the software does not load the entire database at the time of selection, but only when necessary.

When recutting a cross section when using the Extract Cross Section Geometry command, the software will now automatically update the flow lengths for the current cross section and the next upstream cross section.

When loading multiple GIS layers at the same time, the software will automatically assign different colors to each layer to allow the user to better distinguish entities from the loaded layers.

The software will now display the elevation of the underlying terrain surface at the cursor location.

Exporting a HEC-RAS model to AutoCAD, MicroStation, or GIS Shapefiles, the software will include 3D points that represent the cross section geometry vertices.

Selection of multi-tools from the toolbar is improved.

Additional options have been provided for mapping levees to cross sections from the Map View. For example, the user can specify that the levees be placed at a fixed height above the ground terrain or draped onto the ground terrain.

The version number and build date are now added to the application’s startup splash screen.

The user experience in recovering a crashed model has been greatly improved.

Archiving a project now causes the software to first save the project before it is archived.

The user interaction for measuring bridge skew and pier skew from the Map View has been improved.

The Cross Section Data and Bridge & Culvert Data dialog box horizontal size was not always computed correctly. This has been fixed. In addition, the user can resize the dialog box by grabbing the right side of the dialog box where the corresponding plot is and can make the dialog box wider or narrower.

The software no longer automatically closes the Detailed Output and Summary Output HEC-RAS result tables. This allows the user to interact with these dialog boxes while adjusting the input data for the model.

The dialog box used to select a folder for placing files, like for storing shapefiles, has been greatly improved.

The number of computed water surface profiles that can be defined has been increased to 100 to provide better support for the Modified Puls routing method.

Sometimes while digitizing river reaches, the software would accidentally snap to an AutoCAD entity and then terminate the digitizing command.

The displayed Base Map was not supporting transparency levels.

The generated flood map was not saving the defined transparency level.

Software was incorrectly draping the computed water surface contours in Google Earth. Now they are written out at their computed elevations.

Not Supporting AutoCAD Polylines with Arcs

Previously the software was not supporting AutoCAD polylines with defined arcs (i.e., bulges).

The quad tree used to display the model in 3D had some rendering issues which have been fixed.

The Unsteady Flow Computational Options dialog box did not automatically initialize the default values to be used in the unsteady flow computations. This issue caused unsteady flow models to fail to run.

The software accidentally created a duplicate ground point at the thalweg for the defined cross section.

Some of the dialog boxes that allow the user to change display options were rather slow and not very responsive to user changes. This has been fixed.

Loaded image files (i.e., GeoTIFF, Mr.SID, ERDAS, etc.) would always have their border turned on by default. This border is now off by default.

The [Remove All] button used in the ineffective flow areas and conveyance obstructions panel was not working.

AutoCAD layer visibility was not honored after loading a drawing file.

US Foot vs International Foot

On April 13, 2015, one of our software developers “discovered” that there were two different separate foot measurements being used for US units:

He took upon himself to merge these two units together so that a “foot is a foot” without conferring with any of the civil engineers on staff. He was unaware that there was a difference—as most civil engineers (i.e., non-land surveyors) probably don’t as well.

Unfortunately, this change was not immediately obvious to our testing team and civil engineers. The difference between an International Foot and a US Survey Foot is very small (2 parts per million, or .0002%). 2 parts per million is insignificant for most relative distances. However for coordinate values in the 100,000’s or 1,000,000’s in map projection-based coordinate systems such as U.S. State Plane, confusing the foot definitions can produce feet of shift because scaling is relative to the coordinate origin.

Here is an interesting article that discusses what can happen when the two units are mixed up.

Improved the drag and drop reordering of layers displayed within the Map Data Layer panel.

Roadway crossings, inline structures and lateral structures would sometimes shift the location on the Map View after editing the corresponding definition data. This is now prevented.

Many small bugs and crashes have been fixed.

7 Habits I Try to Keep