The first maps on record that took advantage of an aerial perspective were sketched from the deck of a hot air balloon under the auspices of the Civil War’s Union Army Balloon Corps. Aerial reconnaissance exercises took place regularly during the American Civil War and creating a rough map was strategically key. The first methods of imprinting images of light and dark on chemically altered surfaces were tested in 1822. These “daguerreotypes,” named after Frenchman Louis Daguerre and now known as photographs, would permit Earth’s many irregularities, contours and shapes to be seen in an entirely new way. The emergent field of photography was soon combined with surveying instruments and photogrammetric principles. A series of photographs taken from the same vantage point but from different angles supplied the data necessary to construct topographic maps, first compiled in the U.S. in 1921. This was a monumental development in mapmaking, one that made lengthy cross-country reconnaissance trips, sometimes lasting years, less necessary. This article looks at the trajectory from early photographic experiments in flight to aerial mapmaking.

In the early 1800s, there were few reliable means of becoming airborne. When a Frenchman by the name of Gaspard Tournachon, also known as Nadar, climbed into the gondola of a hot air balloon in 1857 for the purpose of recording images of Paris, he was a pioneer. Obviously the perspective from the air was worth recording, but it was a tricky undertaking. The wicker basket where the photographer assembled his equipment and made his prints was constantly in motion and frequently swung wildly with any gust of wind. In addition, early photography, known as ferrotype or “wet plate” photography, required that one side of a thin, black metal plate be coated with a collodion-nitrocellulose solution immediately before exposure. The sticky plate needed to be kept in complete darkness until the photographer immersed it in a silver nitrate solution, rendering it light-sensitive. Once the photograph was taken and the plate had been exposed, development needed to take place within minutes.

Nadar thought he could simplify the photographic process by taking a lightproof blanket up into the balloon, covering all his equipment as he prepared his photos by feel. On his first attempt, he realized that the hydrogenated sulfur fumes from his balloon’s fuel negated the effects of his chemicals. The plates came out blank. To rectify this setback, he leaned as far out of the basket as he dared to prepare his photographic plates. At last in 1858 he developed his first photograph of a section of Paris, clear enough to identify a policeman on a street corner. Other methods of airborne photography were attempted over the years. Carrier pigeons supporting small, breast-mounted cameras with internal timers were sent into the skies. A San Francisco fire in 1906 was documented from the air with the use of a kite-suspended camera. 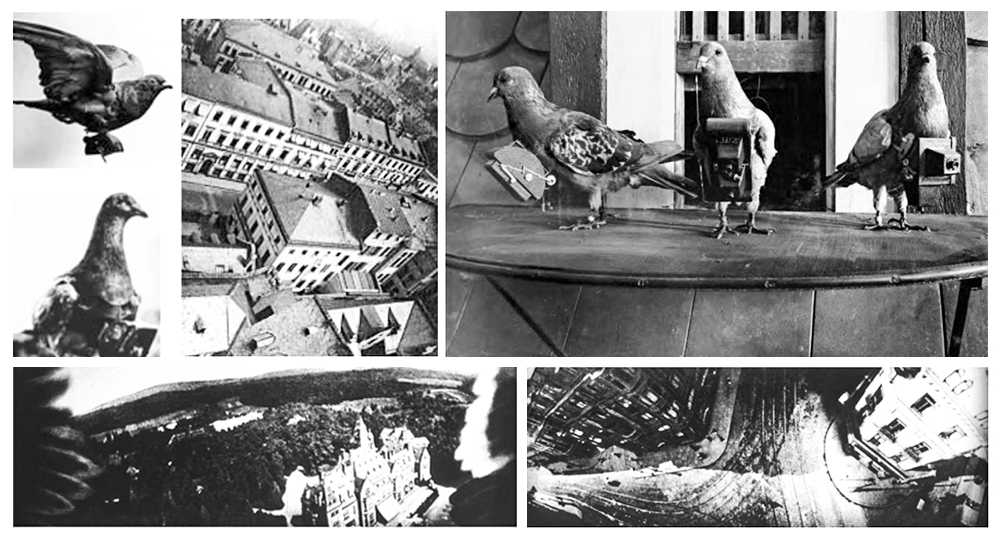 Aerial photography by the first Airplanes

Hot air balloons are tricky beasts and the resulting patchwork of images were often useless in terms of making maps. In 1909, Wilbur Wright took the first aerial photographs while flying over Italy. Unsurprisingly, good results were rare. The pilot was often forced to both fly the plane and manage the camera. With one eye trained on the horizon, he pulled a cord connected to a camera attached to the plane’s struts at (hopefully) the right moment. At other times, the passenger took the photographs through a hole in the floor of the cockpit. The first planes had open cockpits so pilots, passengers and cameras were exposed to freezing temperatures and other distractions. In spite of early challenges, during World War I more countries took the opportunity to use aerial photography for military purposes. In 1918 French military reconnaissance aircraft took some 10,000 aerial photographs of the Western Front in one day alone. 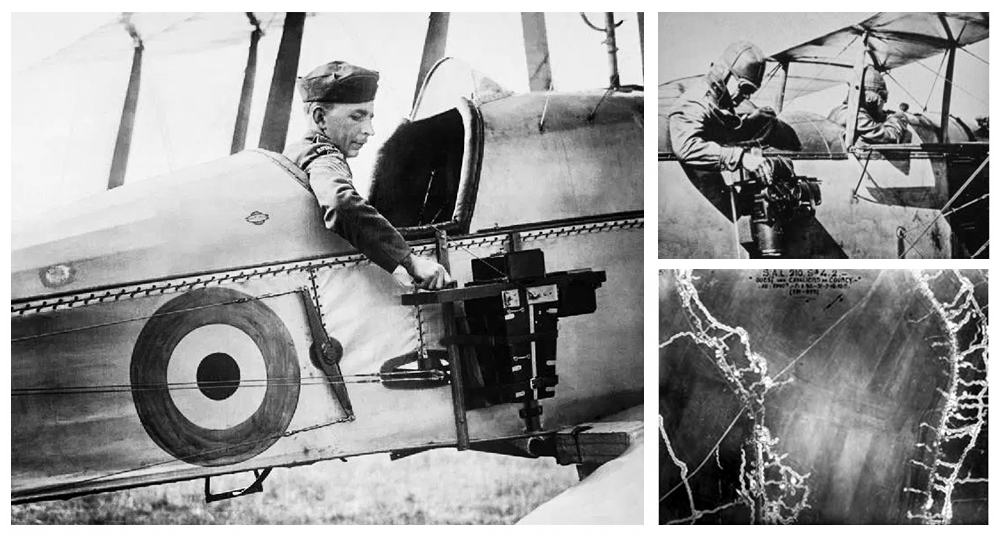 In 1921, The United States Geological Survey (USGS) used 274 aerial photographs taken by its best aerial photographer, Captain Albert W. Stevens of the US Air Corp, to map a 225 square mile area near Kalamazoo, Michigan. Survey mapmakers compiled the Michigan Schoolcraft Quadrangle in 1921. This was the first map in US history to be compiled strictly from aerial photography. Back during the era of John Wesley Powell, the USGS was charged with producing an atlas consisting of maps of uniform size that when assembled would produce a map of the entire country. For purposes of surveying and mapmaking, the country was divided into quadrilateral divisions. The “quad” map in its most basic form consists of 15 minutes of latitude and longitude or around 197 to 282 square miles with a scale of one inch to one mile. The “quad” map was the map most used by project engineers for land analysis prior to the development of GIS and satellite-derived data.

Photography and air travel merged to shape new possibilities in the field of mapmaking. Commercial enterprises quickly grew up in the 1920s and 1930s around the need for aerial surveys. With the use of synchronized cameras, each with multiple ten-inch lenses recording the views from numerous angles, topographical maps could be efficiently assembled. These maps were the engineer’s “bread and butter” for several decades. As an earlier article suggested, there is no doubt that LiDAR technology has fundamentally changed how engineers work, but aerial photography marked a milestone as well in the processing and analysis of geographic information.

Ross, Val (2003). The Road to There: Mapmakers and Their Stories, Plattsburgh, New York, Tundra Books of Northern New York.

A Peek at the High-Tech Playbook: Lessons from Software Giants on Creating a...