Over a century ago, a gifted man by the name of Nikola Tesla toiled away on his inventions in an upper flat of a derelict New York City apartment house until the early hours of the morning. In the afternoon when he took his daily walk, he would make a point of looking for wounded pigeons—and there were plenty to be found on the streets of N.Y. If he discovered a bird, he would care for it until it was fit to be released. Tesla’s fondness for wounded pigeons is a little-known fact, but the inventor is full of surprises on multiple levels. When he was a student at the university, he applied himself so intensely to his studies in school that his professors urged him to quit. To all third parties, it seemed very likely that he would kill himself from overwork. But this was a common pattern of behavior for Tesla. Even at an early age, the young inventor would work with manic energy, frequently working so hard on his inventions that his mother would discover him collapsed in a heap on the floor of his bedroom.

Tesla is most known for his invention of the induction motor and the AC power system, but he earned over 300 patents and would have been recognized for more if he had had a keener business sense. The truth is that like Thomas Edison, Tesla was singular in his drive to invent, but unlike Edison, his interest in translating his inventions to every day applications was largely absent. Some think this factor was influential in shaping the course of technological history for the next several years. This blog post provides a glimpse of an unconventional inventor, once considered “the greatest living electrician,” who could draw crowds of thousands to his lectures and public performances demonstrating the marvels of electrical phenomena.

Typical of many educated families of 19th century Europe, Tesla’s father had hopes that his son would follow in his footsteps and become a clergyman. In 1873, however, the cholera epidemic hit Tesla’s home village of Gospic in today’s Croatia and Tesla became sick on his return from school. He spent nine months in bed on the verge of death, discovered the works of Mark Twain (with whom he became friends with later in life), but miraculously recovered after he extracted a promise from his father to let him study engineering at the local University.

At Graz University of Technology in Austria, Tesla took a large range of courses that included the study of literature, language and botany as well as the more technical subjects typical of an engineering program. He could converse in eight languages, recite poetry, and argue with the best of them, all of which made him a sought-after party guest some years later in New York City.

Following a demonstration of a direct current (DC) machine at the University, Tesla vowed to invent an alternating current (AC) transmission. Despite claims it couldn’t be done, Tesla remained as focused as ever on the problem as he tinkered with machines at his place of work. It was as a lowly employee at the American telephone exchange that he was first exposed to the work of Thomas Edison. He studied many of Edison’s inventions, took apart several devices and tried to rework their design. It was during this time that he fashioned a disk into a shape that would amplify sound, basically an early loudspeaker. He continued to work on the AC induction motor in his spare time, sacrificing sleep to work around the clock, until he suffered a nervous breakdown from which he was not expected to recover. Tesla did recover, of course, and shortly after conceptualized one of his most significant contributions to the field of electrical engineering: the rotating magnetic field which formed the basis for the AC motor.

Encounter with the Giant: Thomas Edison

Through his company, Edison Machine Works, Thomas Edison had by 1884 managed to sell the DC system throughout much of Europe. Direct current was used in factories, rail stations and hotels, but it was not a perfect system because low voltage could only be transmitted over short distances. Although competitors were discussing the promise of an AC system, Edison was unconvinced and preferred to work the kinks out of DC.

When Tesla relocated to the United States, Edison hired him for routine repair work. Tesla managed to impress his employer and avert crisis when the S.S. Oregon, the latest ship in modern trans-Atlantic travel, experienced problems with its lighting system. Tesla worked through the night to fix the system and proposed design changes to Edison’s generators to boot. The working relationship with Edison ended after only six months for reasons that are unclear, but hostilities had already begun to grow between the two inventors.

A Genius in Search of Cash… and a Laboratory

Tragically enough, much of Tesla’s career was spent trying to find funding for inventions. He depended heavily on private investors for support and suffered financially from poor business decisions. As a case in point, after the company Tesla Electric Light & Manufacturing was abandoned by its financiers, Tesla was suddenly penniless and forced to work as a ditch digger for a meager $2.00 a day.

The Tesla Electric Company was founded with the help of Charles F. Peck and Alfred S. Brown in 1887. It seemed that Tesla would at last have the financial backing necessary to pursue further development of his inventions and in fact these years did seem to mark his most productive period. During this time, he further refined the AC induction motor. Tesla applied for several different patents for the unique parts of the system. This was followed by 5 patents in the following year and 18 thereafter.

The Tough Business of Electric Power 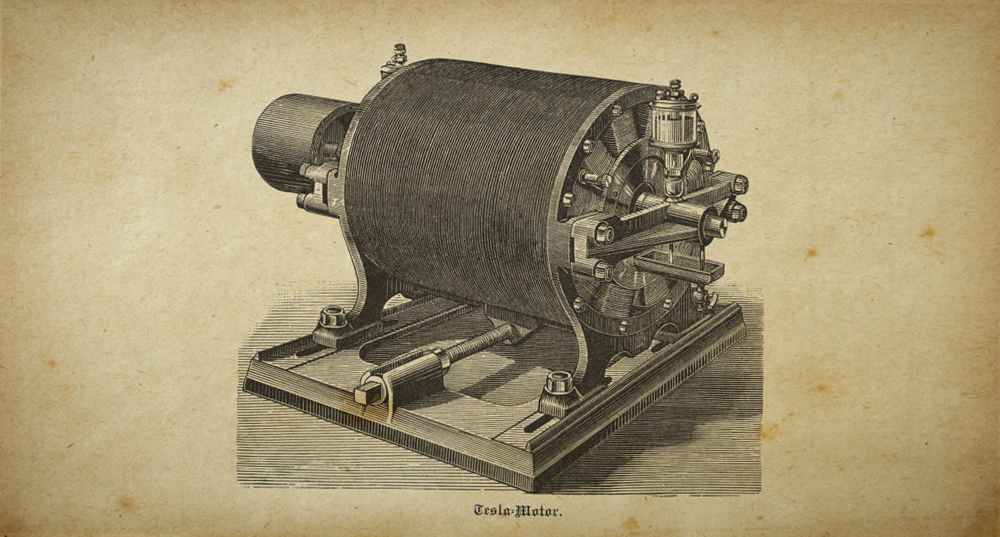 Tesla’s business relationship with George Westinghouse would put him on course to go head to head with Edison on the matter of DC versus AC. After several high-profile contracts went to the partnership of Westinghouse and Tesla, including the contract to set up a hydroelectric generator for Niagara Falls using AC, a “war of currents” heated up. Edison went to great lengths to discredit AC, and claimed it posed a danger to the public’s health and safety. Edison was an accomplished inventor, (the “Napoleon of Invention”) with at least 1000 patents to his name, but he was ruthless as well and intent on protecting his turf. His company, worth millions, was proof of Edison’s drive and shrewd business sense.

In contrast, Tesla often found himself completely dependent on his benefactors. Westinghouse offered Tesla approximately $200,000 dollars to buy out his patents for the induction motor and related transformers, an arrangement to which Tesla agreed. Ironically, although Tesla was financially well off at different points of his life, he ultimately died alone and penniless in a room he kept at the Hotel New Yorker. Following his death, Westinghouse, the company Tesla helped make famous, paid his final bill at the hotel.

Many of Tesla’s most exciting experiments with wireless transmission of radio signals using a giant Tesla coil took place in Colorado Springs, CO. He later relocated his experiments to Wardenclyffe, a laboratory near Long Island, on which was built a 187-foot tower for execution of his “World Wireless System.” Tesla was certain that everything from power to radio signals could be transmitted through and around the planet using complex transformers of his own design. As many of Tesla’s inventions have been realized and his theories widely-applied across the globe, it becomes more apparent than ever just how brilliant an inventor he really was.

Some of Tesla’s Contributions to Modern Technology

Also Read: Hail to an Engineer Who Did It All

A Coffee Bar and Other Perks