Today’s scientists, engineers and resource managers know that a project’s success depends on a variety of factors, including the analysis of several environmental parameters. We know that the natural systems we are analyzing are complex. We know that water temperature, flow velocity, substrate type and other variables affect habitat for fish and other organisms. We know there are strong correlations between physical factors and the character, size and vigor of the associated biological communities. However, there was a time when these relationships were neither known nor appreciated. In the late 1700s to early 1800s, scientists were preoccupied with the sorting and classification of plants, animals, minerals and other natural objects-and little more. Alexander von Humboldt was a bit of an outlier; he was one of the first to explore relationships between organisms and their environment.

Interested in how different combinations of environmental factors formed distinct zones, Humboldt developed the isotherm to show gradients in mean temperature. The maps he created showed how communities of organisms changed with temperature, soil substrate and other parameters and were early exercises in thematic mapping. Humboldt’s ideas formed the basis of what we now know as biogeography or the study of how species are distributed geographically. As climate change continues to impact a greater cross-section of industries like civil engineering, Humboldt’s insights into the interrelationships between environmental parameters grows increasingly relevant. Many believe he was the first scientist to warn of the disruptive effects of climate change. How do his insights help our work as engineers?

What a Career in the Mines Can Teach You

Famous explorers and scientists poked around, explored and gambled with their lives as kids. Humboldt was no different. With the encouragement of his father, he developed an interest in natural history and botany. He mastered additional subjects such as chemistry, electricity and astronomy. He enrolled in the Freiberg College of Mining in 1791 to get training in a practical field of knowledge as well as to satisfy his own interest in learning as much as he could about the physical world. His first position out of school proved him to be worthy of his chosen career. In less than a year, Humboldt had increased the production of gold from “retired” mines by nearly 70 percent, but he refused all offers for promotion. He had other plans. After inheriting a sum of money from his mother, Humboldt set off to see the world.

Not for the Weak: Travels to South America

“We run around like the demented; in the first three days we were unable to classify anything; we pick up one object and throw it away for the next. Bonpland keeps telling me that he will go mad if the wonders do not cease soon.”

In 1799, Humboldt and a young French physician and botanist by the name of Aimé Bonpland received permission from King Charles IV of Spain to explore Spain’s colonies in Central and South America. Humboldt’s list of supplies and equipment was nearly eight pages long and included hygrometers and barometers, thermometers, telescopes, compasses as well as sextants, quadrants and other tools. As soon as their boat set sail, Humboldt was on board taking measurements and sampling the water for plant and animal life. 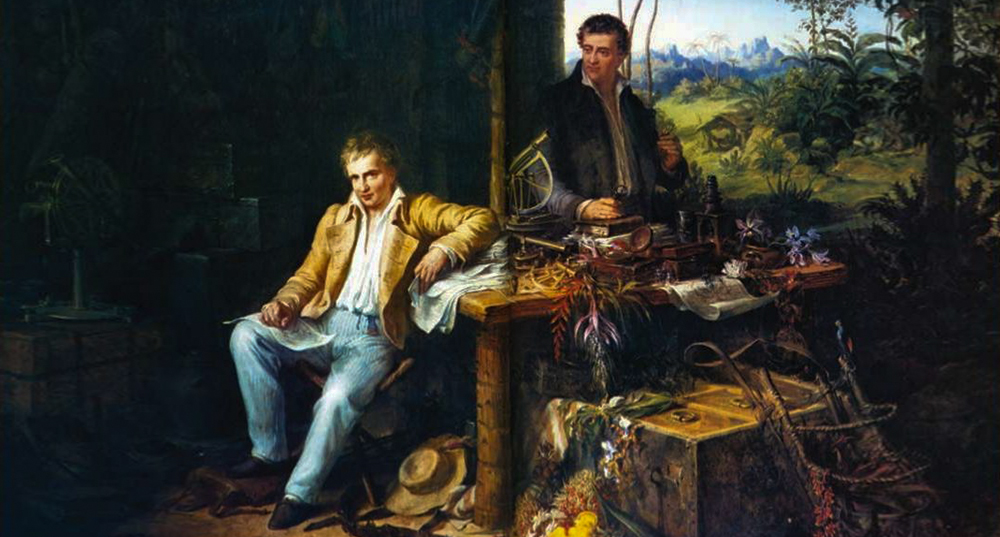 In South America, encounters with electric eels, vampire bats, and alligators were common. Anacondas swam alongside their boats. Malaria struck the expedition several times. Despite risky and miserable conditions, the two Europeans kept up a frenetic pace taking measurements, making records of plants, insects and other organisms. Some 1,500 miles later, the expedition had recorded thousands of previously unknown plants and animals. Plant specimens of nearly 60,000 species were ultimately gathered. The coordinates of specific locations in the rainforest were identified; charts were drawn, data was painstakingly collected. It was around this time that Humboldt’s ideas about the integrated character of life on the planet began to take shape.

Inside a South American Volcano

Humboldt was the first to make ascents of several volcanoes within the Columbian Andes, all of which exceeded 15,000 feet in altitude. His guides sometimes deserted him due to terrifying conditions: “it is a peculiar characteristic of all such climbing trips in the Andes, that beyond the snow line Europeans are invariably left without guides just at the point … where help is most needed”. 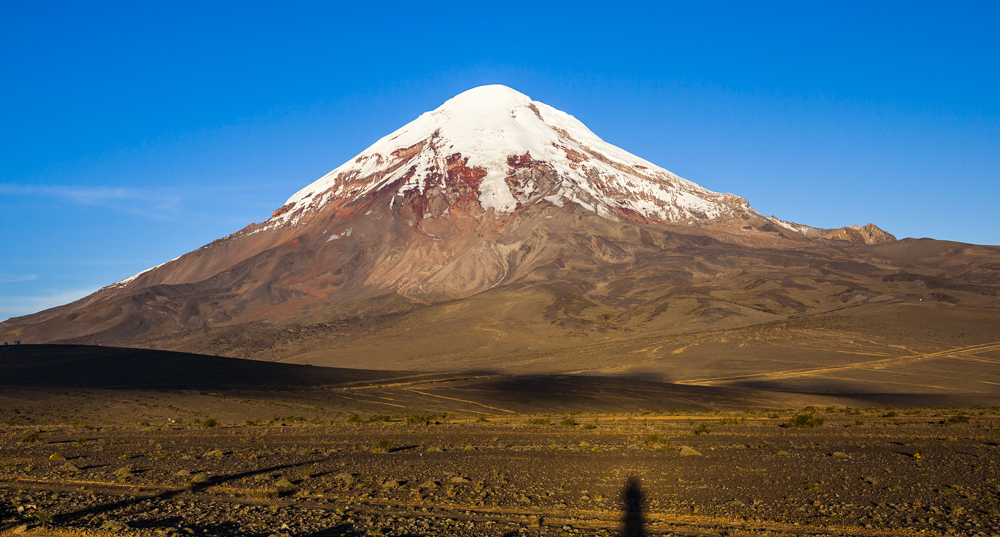 One of the highest volcanic peaks climbed by Humboldt and Bonpland without the support of modern climbing apparatus was Chimborazo. At over 20,000 feet, it was the highest any person had ever yet climbed. Humboldt and his companions had frequent bouts of mountain sickness, but through it all he noted with great detail the ecological communities he encountered and the physical characteristics of their environments. Humboldt proceeded south through the Andes to Ecuador and Peru. Travels in later years would take him to Mexico, the United States to meet President Thomas Jefferson, and Russia. He was a prolific writer. He published over 30 volumes on his South American travels alone. He wrote on the topic of magnetic storms, the composition of air, plant physiology and other topics. After completing five volumes describing his theories about the physical universe in his masterful work Kosmos, he died while writing the sixth. 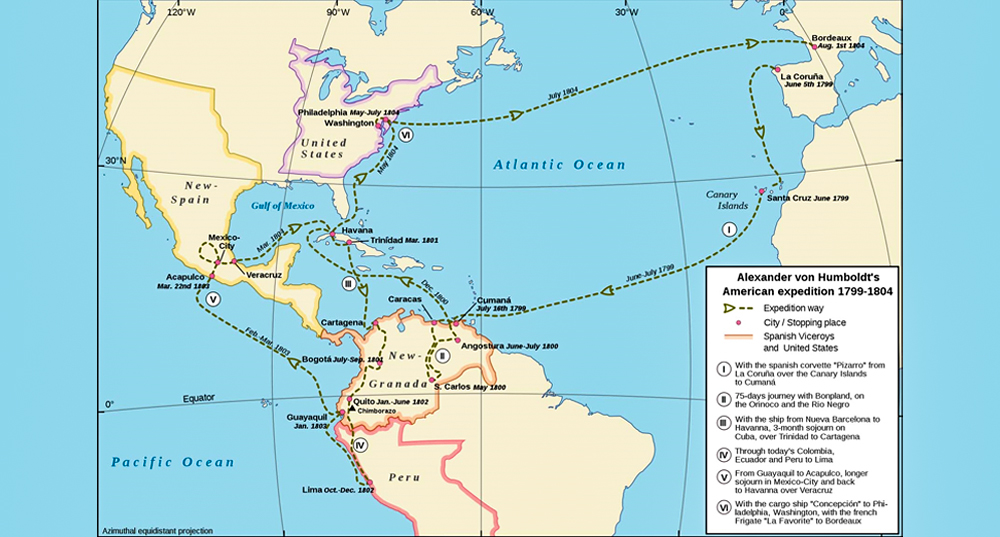 The isotherm, a line connecting points with equal mean temperature, is a prime example of one of Humboldt’s contributions. The isobar, representing lines connecting points with similar barometric pressure, is another. The Humboldt Current, later renamed the Peru Current, is a northerly current that flows along the western coast of South America and is responsible for the upwelling of nutrient rich waters. Humboldt was the first to conclude that the distribution of plant and animal life in specific geographic zones was the product of geology, biology, meteorology and a host of other variables and he was the first to visually display distinct zones of plants and animals on topographic maps.

Integrated, Interdependent and Potentially at Risk

Unlike many of his colleagues, Humboldt saw the world and its parts as one integrated, interdependent whole. He prophetically suggested over 200 years ago that the destruction of the South American rainforests by European colonists could have long-term effects on our atmosphere. Other practices he observed—the draining of lakes and wetlands in Siberia to create agricultural land—led him to predict that irreversible changes in the landscape would soon follow.

So how do Humboldt’s ideas play a role in today’s engineering challenges? Today’s complex water modeling projects are stronger (and the results more compelling) with the many layers of information that inform the engineer’s analysis and give his recommendation scientific credibility. The biological and physical conditions occurring in rivers and watersheds are the product of multiple factors and layers of data. That natural systems are complex and multi-dimensional and that the alteration of one component here can alter the course of events there is a landmark concept we can attribute to the 18th century scientist, Alexander von Humboldt.